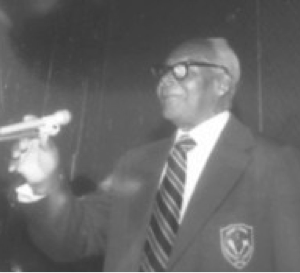 Born in Hanover, Jamaica in 1895 Served in the Jamaica Regiment from 1915 to 1919 during the first World War

Rufus T. Clarke started playing cricket in 1917 for the Second Battalion against the First B.W.I. Battalion in Egypt. He also played for the West Indian Regiment.

He arrived in New York in 1920 and settled in Harlem and again became active in playing and promoting cricket. He then joined the Primrose Cricket Club in 1935 and at that time helped to get Primrose in the New York League. During his years with Primrose, he served as President, Vice-President, Secretary, Recording Secretary, Treasurer and Life Chaplain.

He has been appointed delegate for many leagues and has been an outstanding figure in promoting cricket in new York. He has also helped in getting some of the best cricketers, such as Sir Donald Bradman, Sir Frank Worrell, Everton Weekes and George Headley to play cricket in New York. Mr. Clarke continued to be active in promoting and helping cricket to survive in America.