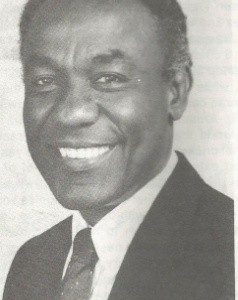 Conrad Cleophas Hunte, the former Vice-Captain of the West Indies Cricket team (1962-67), was born May9, 1932, in Shorey’s Village, St. Andrew, Barbados. He attended the St. Andrew’s Church Boys’ School and the Alleyne Secondary School. He graduated with a high Cambridge School Certificate, which gained him entrance to London University in England. He chose instead to become a professional cricketer.

Conrad worked as a teacher, civil servant, and as an insurance underwriter
in Barbados before immigrating to Britain in 1956. In 1957 he became the
professional player with Enfield Cricket Club in the Lancashire Cricket League and remained with them for six years. In 1958 he was selected to play for the West Indies team against Pakistan. In the first Test in Barbados he scored 142 and thus became one of a select number of batsmen to score a century in his first Test innings.
He carried his bat throughout his innings against Australia in the fifth Test at Port of Spain, Trinidad in 1965. With Sir Garfield Sobers he holds the West Indies second wicket record partner-ship of 446, against Pakistan at Sabina Park, Kingston, Jamaica in 1958. His full Test figures are 44 Tests, highest score 260, eight centuries, with an aggregate of 3,245 runs and an average of 45.46. He is numbered among the top 50 West Indies cricketers of all time.
In 1996, while on a tour of Australia with the West Indies team, Conrad came in contact with the world-wide movement known as Moral Re-Armament (MRA). He was attracted to the concept of helping to fashion a world that is color blind and character-built. In between international cricket assignments, during the years of 1961 and 1987, he travelled extensively with MRA teams of people in Brazil, India, Japan, the USA, the Caribbean, Switzerland, Germany and Nigeria. He got to know firsthand the people and conditions of those countries while working with them to resolve crisis situations there.

As racial tensions began to mount in Britain, in 1960 Conrad saw that there was a need for an answer to the causes of race conflict. Through a knee injury, he retired from first-class cricket in 1967, at age 35, and took up residence in Britain and began to work there to pursue that new cause. The British authorities in London complimented him on the part he and his friends played to defuse an explosive situation in Nottinghill Gate, following the assassination of Martin Luther King Jr. on April 4, 1968.
Conrad is a member of the Council of Management of Moral Re-Armament in the UK and the USA. His first book, an autobiography, “Playing to Win,” was published by Holder & Stoughton, London, in hardback in 1971, and by Himmat Publications, Bombay, in paperback in 1973. In 1975, a documentary of his life and work called “A Personal Choice,” was shown on Scottish television. It was reproduced as a 16mm film and then a VHS video with the same title. The piece has been shown in 17 countries.
Conrad is now a regional manager with A. L. Williams & Company, the fastest growing financial marketing organization in the United States and Canada, with its world headquarters in Atlanta Georgia, U.S.A.
He is married to TV personality Patricia Hunte, a reporter/anchor with WXIA TV, A Gannett Company in Atlanta, Georgia. They reside in Atlanta with their three daughters, Roberts, Grace and Veronica.