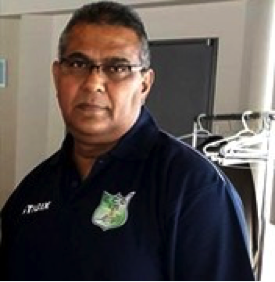 Served as player and administrator for 45 years

CRICKET EXPERIENCE: Praimnauth Persaud has served the sport of cricket, both as a player and an administrator for the past 45 years and is continuing to do so at various levels. He contributed to its growth, development, and visibility in the two Canadian provinces: Montreal Quebec, for almost 10 years and Province of Ontario, mainly in the Brampton, Mississauga, Toronto, Eotobicoke, other cities & districts for the last 35 plus years.

Montreal, Quebec: Player, Captain & President of two cricket clubs. He represented the clubs as both a player and administrator at the league and the City. He was Vice-President of the QCF (Quebec Cricket Federation) and played an active role in the formation of the Brampton Sports & Cultural Cricket Club (BSCC). Player, Captain, Vice-Captain for the two teams at various times. President of the club for almost 30 years, bringing another 3-year term. Built cricket ground from scratch with the assistance of the City and players of BSCC. Formed the BCA – Brampton Cricket Association to enable the city’s justification to Coun- cil for the need to build cricket facilities in the City to meet the growing demands of its citizens.

Worked closely with the Director of Parks & Recs and all levels of employees to promote, grow, build & maintain cricket facilities. Lead representative with the City for the identifi- cation and procurement of our own club dedicated facility. Lead representative and negotiator with the City for facilities, growth & development for the sport of cricket in the City of Brampton for the last 3 plus years and counting. Worked with the City’s engineering team to agree on new designs with respect to building specially constructed artificial pitches to withstand current climate conditions, usage and lower cost and maintenance to the city.

Responsible for the growth and availability of what was 3 cricket facilities in 2014 to now 17 such facilities. Responsible for the city’s incorporation – from blueprint & designs levels – of any new housing & park communities to have a combination Soccer & Cricket facility accounted for in the plans. Grew the BCA from one team to 62 when incorporated into EDCL which was renamed BEDCL as the advice of the City of Brampton. Grew one of the smallest and unknown cricket leagues (EDCL) into now tied with the largest cricket

league (TDCA). Growth from 18 teams to a current 150 teams and continues to have a demand for growth that is stagnated by a shortage of Facilities.

Achieved the following in 2019 with the new mayor Patrick Brown, the councilors, the Parks & Recs & Planning Director & manager and other City representatives that will com- pletely reshape the facilities infrastructure – to be of the quality that is more of the ICC

departments as a MAIN STREAM sport in Brampton with an EQUAL recognition & consid- eration for infrastructure planning & funding – the Mayor as his Special Advisor on Cricket to the Mayor.

2020 Update: Developed the first lighted cricket facility in Canada – true ICC requirements. Opened for Night Cricket. Participated in the Provincial Cricket Organization – OCA as the President representative of an associate league – EDCL – renamed BEDCL. First Vice President of the Cricket Council of Ontario – 2010 – 2014. President of Cricket Council since 2014 to 2019. First Vice-President of CCO (CO) as of 2019 to present.

Along with the 1st VP - responsible for the CCO to now be recognized as the PSO of Cricket in Ontario. Responsible for fulfilling my commitment of uniting Ontario under one (1) umbrella organization with one set of strategic plans for the development & growth of cricket in Ontario - evident by the current new members – OVCC, NOCL, SWOCL, SCA. MCL, MPCL, EDCL each to an organization that now boasts 5 full member leagues and 5 Associates with 3 associates applications pending review for acceptance.

Responsible for the formation of leagues within Ontario Cities that have seen both the growth & promotion of Cricket as well as the development of needed cricket infrastructure e.g.: ▪MCL (Mississauga Cricket League) ▪ BCL – Barrie Cricket league MPCL – Markham Premier Cricket League’ ▪ Stouffvile Cricket Association Chatam Cricket Club ▪ And others. Cricket Canada delegate in 2014, 2015 and 2016 – representing Ontario. Ran for the position of President in the 2016 Elections. Elected as a Cricket Canada Director at Large of office that has been extended. Played an active role in various CCO Youths events, Camps, and tours. Acted as one of the CCO representative at all parents and youths’ meetings and special events.

Actively involved with the CCO (now Cricket Ontario) with the responsibilities of the PSO with respect to the overall promotion & growth of Cricket. Participated as one of the CCO stakeholders in all dealings with the Government, municipalities and respective cities, as well as all member leagues (full & associates) Responsible for the current & future directions of Cricket Ontario (formerly Cricket Council of Ontario). Continue to fulfill the responsibilities of the office of the president for both BEDCL and Cricket Ontario.