Apartheid and The D’Oliveira Affair 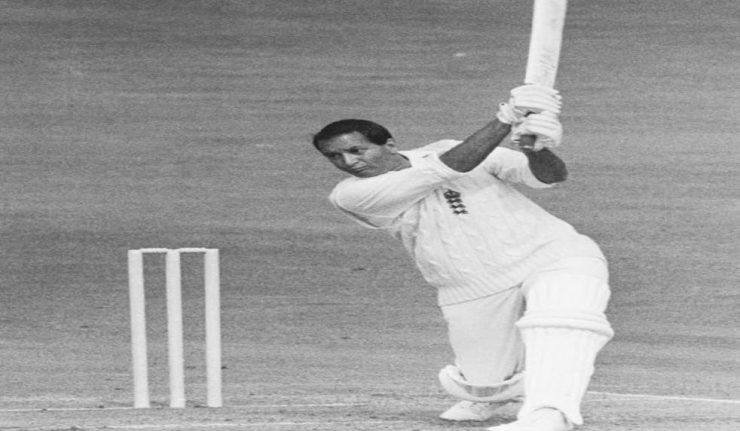 Basil Lewis D’Oliveira was born in Cape Town, South Africa on 4 October, 1931.  As a so called “Cape Coloured”, he was prevented by the authors of the evil apartheid system from playing with or against White cricketers in South Africa. He was certainly a very talented cricketer but because of apartheid, playing international cricket was not a part of his dreams.

However, his talents as an allrounder were recognized by the great cricket announcer John Arlott, who intervened and arranged for D’Oliveira to play league cricket in England.  Thanks to the efforts of Arlott and Peter Walker, a Test player, he accepted a contract in 1960 to play for Middleton in the Central Lancashire League.  D’Oliveira impressed everyone who saw him play with his aggressive style of batting and more than useful bowling.

Tom Graveney, one of the best batsmen on the England Test team, was so impressed that in 1964 he convinced D’Oliveira to try and qualify to play for Worcestershire.

The talented D’Oliveira qualified as expected and in 1965 he started playing for Worcestershire.  He enjoyed a very successful season by scoring 1691 runs at an average of 43.45.

Having also qualified to play for England, D’Oliveira was selected in 1966 to make his Test debut at age 34 against the touring West Indians. He scored 256 runs in 4 Test matches, only Tom Graveney (459) and Colin Milburn (316) scored more runs for England. D’Oliveira also took 8 wickets to be the 3rd leading wicket taker behind Ken Higgs’ (24) and John Snow’s 12 wickets.

Basil D’Oliveira had quickly established himself as a regular player for England but he was now a ticking time bomb in the mixture of the sports and politics arena.

It was apparent that there was always going to be a potential crisis looming over the sporting world as some countries were showing a feeling of absolute repugnance toward the South African regime and what it stood for. However, the South African government became even more entrenched in their policy of apartheid.

Still, the English cricket authorities, Marylebone Cricket Club (MCC) accepted an invitation for their Test cricket team to tour South Africa in 1968.   This was done knowing that the apartheid policy would not allow Black players to be part of a visiting team.

The MCC assured a very concerned UK government that they would handle D’Oliveria’s expected presence by picking the touring team strictly based on merit without any restrictions.

England then competed in a 5-test series against Australia. This series featured a very curious selection pattern concerning D’Oliveira.

In the first Test match, D’Oliveira top scored with an unbeaten 87. No other English player made as many runs in the match but D’Oliveira was promptly dropped for the next three matches.

He was then picked for the 5th and final Test and played one of the most significant innings in the history of Test cricket by top scoring with a splendid inning of 158 runs. Had he failed, his story perhaps would have ended at that juncture.

Despite being selected to play in just 2 matches, the only English players to score more runs in the series than D’Oliveira’s 263, were John Edrich (554) and Tom Graveney (337).

Somehow, the selectors contrived to omit D’Oliveira from the touring party and his omission caused widespread consternation especially among the growing anti-apartheid movement and to a lesser extent the UK government.

An angry and disappointed Sir Learie Constantine commented that D’Oliveira’s omission was “deeply suspicious” and Rev. David Shepherd said the MCC made “a dreadful mistake”

The prevailing thought that it was a political decision, could always be viewed with ample justification seeing that the South African political system specifically stated “non-whites” could not participate in sports with whites on South African soil.  Obviously, Basil D’Oliveira would not be welcomed as a member of the touring party and the MCC certainly knew it!

Thereafter, the D’Oliveira Affair dominated the news. Over 200 members of Parliament protested and some members of the MCC resigned.  Former West Indies cricketing great, Lord Learie Constantine was one of the leaders of countless Anti – apartheid demonstrations. The Test cricketer and one-time England captain Rev. David Sheppard continuously challenged the MCC’s handling of the “Affair.”

The incessant pressure from the anti-apartheid movement led to another unexpected twist to the saga. Basil D’Oliveira was eventually selected in the touring party as a replacement for the injured Tom Cartwright.

The South African government led by Prime Minister Balthazar “John” Vorster immediately stepped in to say that D’Oliveira would not be accepted in South Africa as a member of the English team.

According to Prime Minister Vorster, “It is not the MCC team, it is the team of anti-apartheid movement. We are not prepared to have a team thrust upon us.”

The MCC by now under intense pressure, had no choice but to cancel the 1968-69 tour of South Africa.

However, they also had another big problem to consider, what should they do about the invitation they had extended to South Africa to tour England in 1970?

The Cancelation of the 1970 tour

April 1970 – The British Prime Minister Harold Wilson stated that the MCC invitation to the South African tourists was “a very ill-judged decision.”

May 1970 -The British Minister for Sport, Denis Howell, announced a Sports Council resolution urging the Cricket Council to withdraw the South Africans’ invitation to tour.

Initially the Cricket Council tried desperately to have the 1970 tour take place by promising that it would be the last series to take place between England and South Africa until “cricket is played, and teams are selected on a multi-racial basis in South Africa.”

The Cricket Council reluctantly canceled the tour saying that they had no “alternative” but to accede to the request made by Mr. James Callaghan, the British Home Secretary who later became the British Prime Minister in 1976.

The cancellation of the 1970 tour marked the exclusion of South Africa from international cricket for 22 years.

The anti-apartheid movement was indefatigable in their efforts to thwart the South African regime’s refusal to end apartheid.  They finally helped to force the eventual exclusion of South Africa from International cricket.

The Apartheid Laws were finally repealed in June 1991 and a month later in July 1991, the International Cricket Council sanctioned South Africa’s return to international cricket.

Their first Test match since the series against Australia in 1970, was played against the West Indies in April 1992.

Basil Lewis D’Oliveira will always be remembered as the catalyst behind South Africa’s belated exclusion from International cricket due to their repugnant system and apartheid policies.

This humble and dignified man was offered bribes, he was even asked to make himself unavailable for selection by men of considerable power and influence.  Yet, he never wavered, but with a quiet air of dignity, he would not give up and his inning of 158 in that 5th Test match against Australia in 1968, became one of the most significant innings in Test cricket’s history, because had Basil failed, apartheid would have triumphed for at least for a while longer..

Basil Lewis D’Oliveira the reluctant protagonist, was 40 years old when he played the last of his 44 Test matches against Australia in August 1972.  He scored 2484 runs at an average of 40.06 with 5 centuries and took 47 wickets.