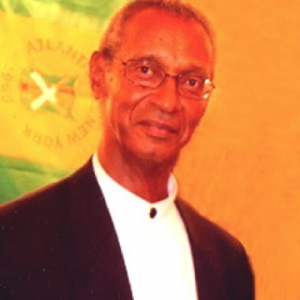 TREVOR H. WALKE  Born at Welchman Hall in St. Thomas, Barbados, Trevor Walke could easily be misidentified as a young man born on a traditional English family manor, with a love for cricket. Part of the foregoing statement is true; the young man did and continues to have an undying passion for the sport and its relevance in today’s world; and as a vehicle for bringing people together and fostering solidarity around a sport that can be a unifying factor in a

Trevor Walke has made an indelible impression on the New York cricket community on his way to creating a legacy of determination, an against all-odds attitude, a never-say-die outlook, and a consummate approach to the game of cricket and

life. He possesses all of the attributes of a fiercely competitive sportsman, and one who demon- strates the camaraderie and mannerisms of a genuine friend who tells it straight.

His USA cricketing journey began in 1966 and it’s still going today, more than fifty-years later. Along the way Trevor Walke has made stops at the following cricket clubs - Cameroon/Kent (1966 – 1977), New York International (1978 – 1981), and American Cricket Society/Everest cricket clubs (1982 – Present) and the Everest Masters XI (2010 – Present). During his cricket sojourn, he has traversed the grounds of cricket leagues like Brooklyn (1966 – 1977), New York (1978 – 1981), New York Metropolitan and District Cricket Association (1982 – 1989), Commonwealth Cricket League (1990 – 2003), Eastern American Cricket Association (2004 – Present), and the New York Masters Cricket League (2010 – Present). With such a rich and varied cricketing experience, it’s no surprise that Trevor Walke has represented the Metropolitan, Brooklyn, Commonwealth and New York cricket leagues at the inter-league level on many occasions.

Who is Trevor Walke and what drives the man who has unquestionably earned the respect, admiration and praise of so many in the cricket community? Well first of all he’s hard to miss in a team line-up, towering more than six feet tall – an intimidating figure if you’re a batsman and he’s running down the track at you, with a 5.5oz missile that’s locked and loaded. The cricketer has captured his fair share of wickets in the four teams and four leagues he has represented as a pace bowler – from senior men to Masters Cricket. Off the field Trevor Walke is best known for his quiet demeanor, but he is a steadfast believer in the core principles of fairness, equity and equality. His modesty is an excellent cover for his passionate personality and his impatience with incompetence and poor governance of the sport of cricket, in the leagues and beyond.

As a cricket administrator, Trevor Walke leads from the front in his role as president of Everest/ACS Cricket Club in the Eastern American Cricket Association. His philanthropic efforts and contributions to the community is only rivaled by his willingness to mentor young cricketers in an unheralded fashion.

The Barbadian-born native who migrated to the USA at age 19 in 1966, has traveled to play cricket in Barbados, Jamaica, Guyana, Bahamas, US Virgin Islands, the United Kingdom, and throughout the USA. The youngest of four siblings (three boys and one girl) Trevor Walke started playing cricket as a leg-break bowler in 1966, but changed to pace bowling four seasons later while playing for Kent Cricket Club, and against his brother Winston who was playing for Cameroon Cricket Club at the time. Kent had no opening fast bowler, so being the consummate team player Trevor Walke switched, found himself to be pretty decent at it and never returned to bowling his googlies, except for one occasion while playing for Cameroon, when his brother and captain pointed out that the team had extra fast bowlers, so he was asked to bowl spin. His spin bowling effort earned him figures of 7 for 28, with the googly being his money ball.

According to teammate Vinoo Solomon, “With Trevor, our team has won 39 championship titles since 1983. In addition, he has participated in three Masters’ League titles since 2014. In almost all cases Trevor has been instrumental in each and every championship title won. He has been excep- tional wherever he has played, whether in the USA, or abroad when touring. Solomon added,”...and the man was still playing cricket at age 70.”

Trevor Walke is a true ambassador of the sport and his native Barbados, where his formative years in the sport and as a human being was cultivated.