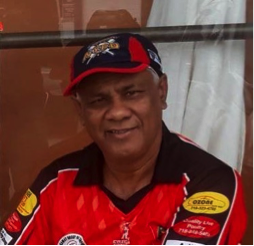 Surujlal Joe Siewharack, a Trini to the Bone was born in the town of Point Fortin Trinidad in 1960. Originally, he lived in Buenos Ayres, Erin in south Trinidad. Eventually to Lachoo’s Road, Penal. At an early age he was involved in many sporting activities in school and his local community.

He attended the Penal Presbyterian Primary School, then the prestigious Iere High School in Siparia, his sporting activities in- cluded cricket, table tennis, soccer, track and field, and many others. Next, he attended Southern Drafting School in San Fernando where he studied Drafting and Architecture. Worked with the Ministry of Agriculture in Centeno. As the oldest of five sibling and his dad ill with heart problems he had no choice but to quit the job and manage the family business J&S General Building Contractors with sixty employees and building five man-

sions at the same time.

Joe became a leader in the community and always trying to help people. After his dad died in 1982 at the age of 40, he became the leader of his family and carried on taking the responsibilities.

Joe migrated to New York City in March 1989 and continued working in the construction field and then unto professional window cleaning climbing those tall skyscrapers in Manhattan. In 1998 he formed his first company S&S Window cleaning and currently, T&T Awards & Custom Printing and Magnetic Construction Co.

With his continued passion for sports and youth development he was asked to joint Eagles Sports Club and became the VP IN 2001. In 2003 he formed the New York Alliance Sports Club and in 2004 merge with Melbourne CC Bajan based, and is now known as Melbourne NY Alliance Sports Club. In 2004 he formed the NY Cricket Coaching School which is now known as the NYC Youth Cricket Program. They are located at the most famous Baisley Pond Park Cricket Oval, Queens, NY, and a field that he himself maintains. Joe serves as President of the club and PRO/Coach of the youth program. The youth program has been there for 15 years now with many, many, achievements. Their youth team DRAGONS are currently the holder of 4 NYPD Youth cricket champion- ships and many others, with at least 18 players representing the USA national cricket team. His organization are responsible for bringing teams to NYC. Clarke Road United and PowerGen National cricket teams, Exchange Youth team, St. Mary’s College and CSK youth team from Trinidad to the Tri-state, including Hartford CT.

Joe served as VP of the United Cricket League, VP and President, American Cricket League based in Brooklyn and Queens and on the New York Cricket Region Board. He was involved with the CRICKET LEGENDS in Florida alongside Lawrence Rowe and in NY with Gordon Greenidge. He has a great working relationship with the NYC Parks and Recreation, NYPD Youth Tournament, PSAL and many leagues.

He is a Director in the International Rotary Club Jamaica Queens Branch where they do a lot of community work and honor the NYPD officers each month at Villa Russo Restaurant.

Mr. Siewharack has great love and passion for the Trinidad and Tobago Diaspora in New York and have been working alongside the Consulate General. He helped and contributed too many celebrations and functions with them. If you know him he does not say no.