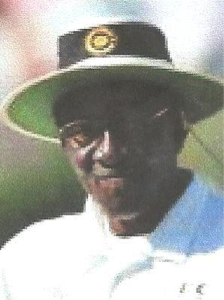 Holds record for umpiring the most Test matches

Stephen Anthony "Steve" Bucknor, OJ, (born May 31, 1946 in Montego Bay, Jamaica), umpired in a record 128 Test matches between 1989 and 2009, and also in 181 One Day Internationals during this period, including five consecutive Cricket World Cup finals from 1992 to 2007. He was widely known for his long deliberations before making decisions, for which he earned the nickname "Slow Death".

After umpiring in a few international matches, he was selected to umpire at the 1992 Cricket World Cup in Australia, and went on to stand in the final despite being quite inexperienced. He also stood in the next four World Cup finals in 1996, 1999, 2003 and 2007, with the 2007 World Cup taking place in his native West Indies.

In 1994, the ICC introduced a policy whereby one of the umpires in each Test match would be independent of the competing nations, selected from the International Panel of Umpires. Bucknor was a member of this panel from its foundation until the ICC changed its policy on umpires again in 2002. Since then both umpires in Test matches, and one of the umpires in ODI's have been independent of the competing countries. The officials are now chosen from the Elite Panel of ICC Umpires, whom the ICC considers to be the world's best umpires. Bucknor maintained a place on the Elite Panel from its foundation until his retirement.

The ICC confirmed on February 23, 2009 that Bucknor had decided to retire from umpiring in March 2009. His final Test match was the 3rd Test between South Africa and Australia at Cape Town on March 19–23, and his last One Day International match was the 4th ODI between his native West Indies and England at Barbados on March 29, bringing his 20-year career to an end.

Bucknor has stood as an onfield umpire in five World Cup tournaments, during which he has officiated 44 matches including five finals.

Before becoming an umpire, Bucknor was a football player andreferee, a high school mathematics teacher and a sports coach.

In October 2007, he was awarded the Order of Jamaica, Commander Class, for "outstanding services in the field of sports".