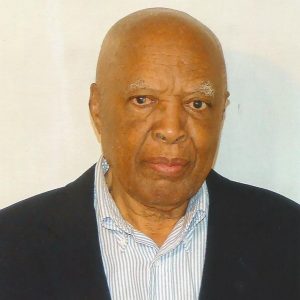 A product of Kingston race course (now Heroes Park), which produced and nurtured many former top Jamaican cricketers, Stanford “Staffy” Walker was drafted into becoming a member of the Cricket Hall of Fame during its reorganization in 1997 by then coordinator Joslyn Chance Sr.

With more than 30 years newspaper experience, he was asked to handle the publicity for the revived institution which had been out of operation for the last five years. Staffy, who began his newspaper career as a trainee at the Gleaner Company in Jamaica worked his way up to become an Assistant Editor of the Nassau Guardian newspaper in the Bahamas.

Although the work with the Cricket Hall of Fame can be very challenging and at times frustrating, making him feel like giving it all up, Staffy has diligently continued to perform his duties for the institution.

Staffy’s interest in sports developed at an early age with him participating in track and field, cricket and football (soccer) on a regular basis. He was high jump champion in both Classes 1 and 2 at the elementary level for schools in Kingston. Recognizing that he did not have the built to continue in track and field, after school Staffy concentrated on playing football (soccer ) and cricket. As a member of the Gleaner Company’s teams, he played in the Henriques Cup, Evelyn Cup (cricket) and Business House (soccer) competitions before leaving Jamaica.

In 1962, he migrated to the Bahamas, continued playing both sports and after his second season in the local competition was selected to represent the country as a goalkeeper. He was also instrumental in reorganizing the St. Albans cricket team, a respected competitor in the local league, later becoming its captain. After playing for a number of years he retired and began serving as an umpire.

Staffy’s next stop was the U.S. which he migrated to in 1980. He spent a year in Miami before coming to Hartford. On his arrival here he was persuaded by the late Edwin Prescott, a well known cricketer in the area, to serve as an umpire in the Connecticut Cricket League.

Staffy, who at one stage was the coordinator for the league’s umpires, served diligently for a number of year’s until he became disillusioned over the lack of respect given him by the then officers of the league and quit vowing not to put his foot back out on any cricket field in Connecticut, even if it is a friendly match. So far he has stuck to his vow and has dedicated all his time and energy to working with the Hall of Fame.

“It is a challenging task having to attend meetings every Wednesday, but the reward is that I get the opportunity to meet some of the past greats of the game and to engage in lively, entertaining and enlightening discussions with members of the Hall of Fame, something which I relish,” he said.