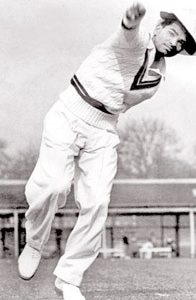 The South African googly bowlers who came to England in 1907 marked a new stage in slow bowling. Since that revolutionary tour, nothing in slow bowling has so gripped the attention and wonder of the world of cricket as the performance of Valentine and Ramadhin for West Indies in the summer of 1950. Whereas the great slow bowlers have usually taken a decade or more to mature, each was barely twenty years of age when the season started. In 1934 Grimmett and O’Reilly had dominated English batting. O’Reilly was 29, Grimmett was already 42 - ever since 1914 the master slow bowlers have taken ten years to mature. A friendless orphan, ‘Sonny’ Ramadhin was helped, as a budding cricketer and otherwise, by a Barbadian inter-colonial cricketer living in Trinidad. Two trial games were the only first-class matches before his selection for England, and John Goddard and Jeffrey Stikkneyer should be remembered for the boldest and most successful adventure in the history of cricket selection. Ramadhin in a one-day trial match against Indian Gymkhana took five for 9; in the second match against Yorkshire, he took for 30 and up to the last game at Scarborough, when he took ten wickets for 85, he and his partner were never mastered by any line of English batsmen.
What exactly was his degree of skill as compared to the great masters of slow bowling? It is of course difficult to state. But he had the unique virtue, impeccable length; he turned the ball from the off, and though no googly bowler, he bowled a leg-break or one that straightened. Walcott, who kept wicket to him all through the season, has admitted that to the end he could not tell which way Ramadhin would turn the ball.
Ramadhin went to Australia and in the First Test at Brisbane completely mystified the Australian batsmen. Afterward, under a planned and determined assault by Miller, he did not live up to expectations. Against India in the West Indies Ramadhin again was disappointing, but he has a faculty of recovery and against the formidable array of batsmen in the 1953-54 MCC side, he bowled a maiden over in every three and took 23 wickets, far more than anyone else on either side and fifteen more than any other West Indian bowler. Against Australia, in the West Indies, he failed badly. But when he came to England he began the season well and usually bowled as devastatingly as ever. In fact, he took 119 wickets at a cost of only 14. But he had what proved to be a traumatic experience in the First Test at Edgbaston. In the first innings, he seemed as mystifying as in 1950. In the second innings, May and Cowdrey faced him with a planned resolution and put on 411 runs. In addition, Ramadhin was over-bowled.
He never recovered and in the remaining Tests of the season, his performance was innocuous. He started well in Australia in 1960-61 but when he wavered, another off-spinner, Gibbs, supplanted him and he dropped out of the West Indies side. Kent aimed to make him one of their professionals but it was Lancashire for whom he finally played in 1964, and for whom he showed much of his old skill.