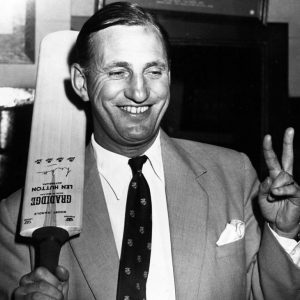 Sir Leonard Hutton will always be remembered as the maker of the record score in England vs Australia Test Matches, 364 at the Oval in 1 938, and as the first professional to be regularly appointed captain of England. He was also the first professional to be elected to membership of the MCC before his career had finished and the second to be knighted for services to cricket. He is one of the few who have made a hundred in their first Test innings against Australia; one of the select band, too, who made over a hundred centuries in first-class cricket. He holds the record for the number of runs made in a month - 1,294 in June 1949. After this, it is almost superfluous to say that he was a great batsman, how great one only realizes when one considers the handicaps under which he labored for much of his career.

The war cost him six of his best years and after it his left arm was permanently shorter and
weaker than his right. For years against Australia he was in an unreliable batting side struggling against overwhelming opposition and later was subjected to the strain of being captain - always so much greater for the professional who has not been brought up to it than for the amateur who has. Yet against Australia he made 2,328 runs with an average of 54.46 and in the 1950-51 series which we lost 1-4, his average of 88.83 was 50 ahead of the next score - the perfect Oval wicket, the weakness of the Australian bowling except O’Reilly (what an exception1) and the thirteen hours it took. Yet it is like Paradise Lost - easy enough to criticize, but still, when the critics have said their worst, a stupendous work.

Indeed ‘work’ is the right word and most of us would rather have seen that 37 at Sydney in 1946, made out of 49 in twenty-four minutes before lunch, and ended almost as unluckily as Woolley’s 41 at Lord’s in 1930, with which it is so often compared, or that 62 not out at Brisbane in 1950, both of them, innings which showed a great stroke player at his attacking best. More controversial is his influence on the younger generation of batsmen. He was almost the first great player who habitually, at least after the war, played slow bowling from the crease, and he was himself for this reason relatively vulnerable to the off-spinner. A whole generation has copied him and it is a sad thing that so fine a batsman and so beautiful a stylist has been to some extent responsible for what seems to many, one of the greatest weaknesses in modern cricket. Apart from his batting he was a splendid field close in and a fair leg-spinner of the type who seldom produces a startling analysis but who, shrewdly used, often gets a valuable wicket or two - a type in fact which present
-day English captains never do use.