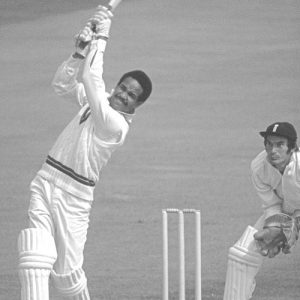 The man who performed two classic innings Down Under that were labeled the “greatest ever” seen in that country. And on both occasions the former maestro Don Bradman was there to see the innings and set seal on them. This how Don Bradman described Sobers’ 254 for the “Rest of the World” against Australia in 1971 at Melbourne: “I believe the Gary Sobers innings was probably the best ever seen in Australia. The people who saw Sobers have enjoyed one of the historic events of cricket. They are privileged to have such an experience.”
As Trevor Bailey said in his book ‘Sir Gary’ the great Don Bradman has never been too extravagant in his praise: “It meant the innings was as near to perfection as makes no difference. What appealed to Bradman, who has himself scored more than 300 in a day in a Test and averaged a century one out of every three times he strode to the wicker,” Trevor Bailey went on, “was the range and quality of Gary’s stroke production, both in attack and defense. They had to be. Nothing less would have satisfied, captivated and delighted the Don.
Many years earlier, Learie Constantine had told Sir Donald to look out for Sobers, a lad who hit the ball harder and more consistently hard than anyone he had encountered.
The second great innings was a knock of 132 in 123 minutes in the famous “Tied Test” at Brisbane in 1960 - 61, of which Jack Fingleton wrote in Fingleton on Cricket: “It is not easy to decide which innings is the greatest one has seen. In the circumstances one would give the accolade to McCabe in 1932, yet I consider myself fortunate to have seen this one by Sobers”
Then Don Bradman hit the punch line. Of course, as Trevor Bailey said, the Don was excited by both the method and the execution which must have reminded him of his own youth: “Thank you very much, son, I know you wouldn’t have let me down. And it is a good thing you couldn’t pick Richie, or you would have murdered him.” Richie of course was the famous Australian leg break and googly specialist Richie Bebnaud. Frankie Worrell incidentally described the innings as the best he had ever seen Gary play. This innings came at a p psychologically fine moment, for boosting Gary’s own morale and his team’s, which was 42 for two and then 65 for three. There are many examples of Gary’s prowess as a big hitter Down Under, Trevor Bailey recalls, and one is him lofting Alan Davidson, with the new ball, over the straight scoreboard at Adelaide. “An enormous blow by any chance.”

Sir Don Bradman, after Gary’s great 132, began to think what it could mean to Australians if he could bring Gary to play in their domestic cricket. And he did so successfully. Trevor said, “Gary in 1962 - 63, became the first cricketer ever to achieve the ‘double’ of a thousand runs and fifty wickets in a season of first class cricket - and this despite the fact that Australia has produced some of the finest all-rounders in the game. Nothing illustrates the completeness of his cricket skill more than that feat. As an all-rounder Garfield Sobers stands supreme,” Trevor Bailey went on. And, well, if Trevor Bailey’s opinion is wrong, Heaven help us. No one else can judge better than he. Then Trevor compares Gary with Keith Miller, Australia’s famous all-round cricketer. Keith is one of the greatest that ever lived and played cricket the world over. He was the most popular player or writer to come to the Caribbean. Good morning, Mr. Walker!
Measuring up Keith to Gary, Trevor Bailey says: “The nearest to Gary must be the mercurial Keith Miller, exciting, effervescent, brilliant and quite unforgettable. His claims are certainly high. Besides being a magnificent fielder, he would have gained a place in the most powerful Australian XI, since the war, and debatably of all time, for either his batting or his bowling. With his partner Ray Lindwall, Keith formed one of the most feared and effective opening attacks ever.
“Two other outstanding Australian all-rounders deserving consideration are Richie Benaud and Alan Davidson, but here the gap that divides them from Gary is even greater.” And then Trevor Bailey names some West Indian greats: “Although the West Indies has bred many fine all-rounders such as Keith Boyce, Gerry Gomez and Denis Atkinson, there is nobody who comes in the range of Gary.”
“What about the giants of the past?” Trevor Bailey asks himself, and then names three famous players - Sir Leary Constantine, Frank Wooley and Wallly Hammond, and recalls Learie square-cutting a ball for six.
“I have seen Ben Sealy square cut a ball for six in the first over of a Bonanza Cup match on the Queen’s Park Savannah. But somehow it’s strange to see such a shot in cricket these days. It’s good because there is a greater discipline in our cricket than when Clifford Roach and Learie Constantine played in the 1920’s and 1930’s and hit the ball outside the ground. I have seen Constantine go down on one knee and smash a Ken Farnes into Havelock Street. And I have never seen Gary Sobers do th is. But look at the fantastic record Gary left behind—832 Test runs and 235 Test wickets. That’s fantastic. But such a fantastic career Down Under must have a happy ending. Yes it does. Gary married an Australian girl, Miss P rue Kerby on September 11, 1969 and tied the bonds on and off the field between the West Indies and Australia, very much tighter.”

Sir Garfield Sobers was inducted into the USA Cricket Hall of Fame in 1984 based solely on his many accomplishments in cricket. In 1971, the great Sir Donald Bradman described Garry Sobers' 254 for the "Rest of the World" against Australia at Melbourne, as, "I believe Garry Sobers' innings was probably the best ever seen in Australia."

Sir Garfield Sobers is regarded as the finest all-rounder ever in the sport of cricket. Born on July 28, 1936, in Bridgetown, Barbados, to Shamont and Thelma Sobers, he is the fifth of the six children in his family. In 1953, he made his first-class debut at age 16 against India at Kensington Oval in Bridgetown, Barbados. At age 17, he made his international Test debut against England at Sabina Park in Kingston, Jamaica. In 1958, Sir Garry became the youngest player to break the individual scoring record in Test cricket with his unbeaten 365 against Pakistan, and he remains the youngest Test triple-centurion. The Cricket Hall of Fame is pleased to present Sir Garfield St Aubrun Sobers with the Lifetime Achievement Award for his sterling contributions to cricket, the promotion of the sport, and the development of friendships across ethnicities, nations, and religions.

Sir Garfield joins an elite group of stalwarts who have received lifetime achievement awards, and who have all made significant contributions to the sport of cricket; for their countries and communities.

Among those are Lloyd Dixon, Michael Holding, Donwell Powell, and Roy Sweeney.