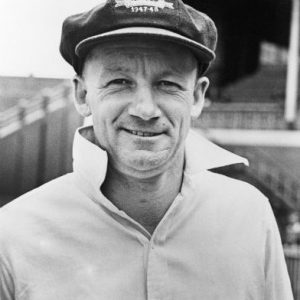 Bradman’s birthplace, on the 27th August 1908, was Cootamundra, New South Wales, but from the age of 2, his boyhood was spent in Bowral, some 80 miles south of Sydney. There he revealed precocious skill in games and athletics and through the elaborate organization of Australian sports he was filtered into Grade and State Cricket.
His first Sheffield match, for New South Wales in 1927, brought him a score of 188. Through the remainder of his First-Class Career, extending over 21 years, he was to average a hundred for every three innings he played, creating standards of performance beyond earlier contemplation. At the time of his retirement in 1948, he had made 117 centuries, 29 of them in Test matches. His highest score was 452 Not Out, he had played 6 innings of over 300 runs and 37 over 200.
Bradman’s first test match was a chastening experience, but the 20-year-old Australian’s ability was only deflected, not deterred, and on restoration to the national team for the Australian selectors never doubted again. Reputation preceded him to England for the tour of 1930, but his warmest admirers could not have contemplated the success that garlanded his way. The program began at Worcester, where Bradman scored 236: at its end, his aggregate was 2,960 and his average 998.66.
From 1930 to his retirement in 1948, after a 4th tour of England, Bradman dominated the batting of the world. After a 4th tour of England no less impressive than the first, though beset by injury and ending in dangerous illness, he became Australia’s captain and never lost a rubber. In leadership, he displayed the same shrewd judgment, the same unflagging concentration, the same flexible resolve that was characteristic of his own contributions at the crease. By its very efficiency, Bradman’s batsmanship implied a ruthless self-containment, but his batting was never coldly mechanical in the same lacking cooperative purpose. His great scores were invariably compiled to fit the framework of the match and attuned to the circumstances of the occasion. The keen eye and exceptional powers of coordination gave him the initial advantage in his command over all types of bowling.
His inspiration was confidence in his own ability. Only on the untrustworthy pitch was he prepared to concede equal rights for the bowlers. Beneath the calculated devastation lay a rich seam of creative batsmanship, vigorous in execution, astonishing in certainty. The timing of on-drive, cut and hook caught the breath in wonder and the footwork dazzled.
The pinnacle Bradman attained was bound to be lonely. As a public figure of immense significance, he could scarcely hope for existence as a private person. In cricket and business he lived in the limelight, after playing retirement, he undertook administrative responsibility, becoming a selector and a powerful influence in cricket politics. He thought shrewdly, wrote convincingly and spoke fluently, justifying all the implications of knighthood for services rendered to cricket.