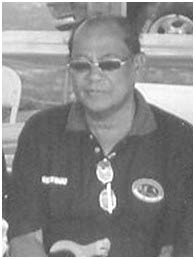 I was born on October 2, 1934, in Jamaica, West Indies; the third son of Mr. and Mrs. Cecil Sweeney. I attended Thompson Town Elementary School. During that period, I was the captain of the school’s team and led our school to many victories. I continued my education at St. George’s College where I initially recognized cricket as my favorite sport, and played school by cricket. After my graduation, my first employment was for the Ministry of Housing. I became a member of the Jamaica Government Railway Cricket Club. Moreover, it was there that I played cricket representing Housing.
Upon migrating to the United States, I joined the U.S. Army, and served for three years. I continued my education by attending Polytechnic University, where I earned a Masters degree in Civil Engineering. However, I could not detach myself from my favorite sport. After residing in the U.S. for four years, I became deeply involved in cricket by organizing various teams. I was involved in the formation of the Eastern American Cricket League and Connecticut Cricket League. I was one of the founders of the Westbury Cricket Club, of which I have been the President for the past twenty-two years. I was the first promoter to bring the complete West Indies Test Team to the New York Metropolitan area. This was also repeated in 1988, and 1989. These games were played at the Mt. Vernon Memorial Stadium.
My aspiration is to see a stadium built just for cricket, where this sport can be played on a regular basis. In addition, a stadium where the conditions will be better for the players and the spectators. I will continue to do my best to promote, and support the game I love so very much: “Cricket Lovely Cricket.”