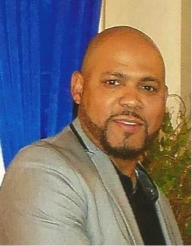 My cricketing career started back in Jamaica as a little boy in the small district of Yardley Chase in South Field, St. Elizabeth. I started playing competitively for my primary school of Mayfield and then went on to High school of Munro College where I represented the school in both the under-16 and under-19 categories from the age of 15. After my final year at Monroe in 1986, I went to STETHS (St. Elizabeth Technical High School), where the cricketing program present is what I required to expand my game. Under the leadership of Dr. Donnovan Bennett and coach Jr. Bennett, it was a turning point for me. From there I captained the

team to the Headley Cup Championship in 1989, defeating Titchfield High School in the finals. We also won the Spaulding Cup, defeating Kingston College in the same year. From there, I went on to captain the Jamaica Youth team in the Northern Telecom Youth Tournament in Guyana in 1989 as well. We finished in second place with two other teams. From that tournament, I made the West Indies Youth Team as vice-captain, touring Canada in late 1989.

I made my debut for the Jamaica Senior Team in 1990, playing against the touring England Test team, and my regional Red-Stripe cup debut in 1991. I played for Jamaica for five years subsequently and one game for the West Indies against the rest of the world in Scarborough, England in 1991 as well. I played in the leagues in England for five years, with the first being in Harringey Cricket College and played the four proceeding years in the Lancashire and Somerset leagues. I migrated to the United States in 1995, starting playing for the U.S. and started captaining the United States team from 1998 to 2004, with the capping off of a title victory in the Six Nations Tournament in Sharjah and Dubai in 2004. It was the qualifying tournament for the Associate Membership of ICC teams, including UAE (United Arab Emirates), Holland, Scotland, Canada, and the United States. We won the tournament of which I was captain and then went on to play for the Champion’s Trophy in England in 2005 against Australia and New Zealand. I played in the leagues in the United States from 1996 to current times. I also played for JSAC and won the championship in 1997, went to Progressive Cricket Club in 1999, played for ten years and won a few championships along the way. I went to Villagers Cricket Club in 2012, winning the championship twice, Queens United in 2017, captaining the team to the finals, where we unfortunately came up short. I played in the Michael Holding Masters Tournament in Jamaica from 2012 to current, winning the competition twice in 2016 and 2017.