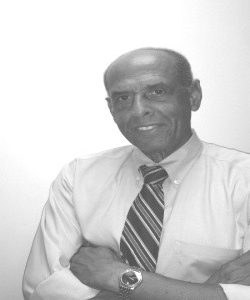 Born in Jamaica, after leaving Morris Knibb Preparatory School, Neville Flowers attended Calabar High School where he excelled in both soccer and cricket. He represented the school in both the Manning Cup (football-soccer) and Sunlight Cup (cricket) competitions. In Manning Cup, he was known for his speed and his ability to score. He did equally well in the Sunlight Cup competition and represented the All Sunlight Cup cricket team in 1962.
In the summer of 1962, Flowers migrated to New York to join his parents. While attending Queen’s College, he played cricket for JSAC in the Metropolitan Cricket League under Captain Busta Lawrence. He also played soccer for Queen’s College. In 1965, he left JSAC and formed his own team, Islanders. He captained his team in the Metropolitan League until his senior year in college where he was the lead goal scorer on the school’s soccer team and was elected to the All Metropolitan soccer team.
A formidable cricketer, Flowers specialized as an opening batsman, who was known for his defensive, steady style. His stubborn character was matched by his stubborn style of playing – refusing to give his wicket away due to a silly shot. He may not have been the most exciting player, but he scored valuable runs for all the clubs that he played for in the Metropolitan League, the American League, and the New York Masters League.
Flowers has made contributions to many cricket clubs in New York and the Caribbean to help them to be successful over the years. He has volunteered his services as a Physical Therapist to the New York Red Stripe Cup teams, the US Masters Team tour to Jamaica, Barbados, Antigua, Grenada, and the women’s Hockey team to Argentina. The Under 17 Reggae Boyz of Jamaica has been welcomed at his facility.
Now, in the twilight of his playing days, Flowers formed an All-Pro Masters team that participates in the New York Masters Cricket League. He is still playing competitive cricket and every year contributes to the Michael Holding Masters scholarship awards in Jamaica. His love of sports also played a role in his choice of profession.
In 1967, he attended Downstate Medical Center’s Physical therapy Program. He was the first minority to be accepted into that program and he successfully earned his Bachelor’s Degree in Physical Therapy in 1969. He went on to earn a Master’s Degree in Exercise Physiology from Long Island University. He was Chief of Physical Therapy at St. Mary Hospital from 1971 to 1978. He then left the hospital settings to concentrate on building a private practice. He also did that successfully, building not one but two private practice
locations.
Flowers continues to break ground in his field and is the owner and operator of the largest minority-owned rehabilitation center in New York City. He expanded his practice to include a full-service Gym, the Cross Island Sport and Fitness Center. A prominent businessman in New York, Flowers is married to Joan McDonald, an attorney. They have three children, all boys. . Their oldest son Michael is a Physical Therapists and is the CEO of his father’s business. The second son Brian is a Medical Doctor, and his youngest son Larry is an attorney. Flowers is the embodiment of success through hard work and even as he has accomplished all these feats, still enjoys playing a game of cricket every week in the summer.