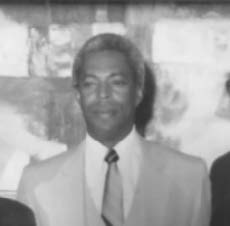 Lance Gibbs began as a off-break bowler in his native Guyana and developed into one of the greatest off-spinners of all time, taking more Test wickets than any other player in the game’s history. He made his Test debut for the West Indies against Pakistan in 1957, and after a spell around 1970 when he was thought to be finished with top class cricket he came back with one of his finest series against Australia in 1972-73, capturing 26 wickets (average 26-27). He then continued as a Test player until 1975-76 when against Australia he passed Fred Trueman’s record of Test wickets. Prior to 1972-73 his finest Test series was that against England in 1963 when he also took 26 wickets (average 21-30). In 1960-61 he became the first man this century to perform a hat trick in Australia. He had seven seasons with Warwickshire from 1967 and helped them win the championship in 1972. His best season in County cricket was 1971, with 131 wickets (average 18-89).