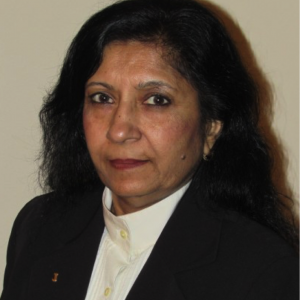 Jyotsna Patel is an avid cricket enthusiast with a passion for promoting cricket among girls and women in the United States of America, having played the sport at the highest levels.

For more than three decades, she has crafted, cradled, and nurtured her love of cricket, while honing her skills representing several first-class India teams. Jyotsna experience as a cricketer includes playing at the national level with India women’s national cricket team from 1974-1978, and representing India against Australia, New Zealand, and the West Indies. During that period, the stylish right-handed batswoman also captained the Indore Madhya Pradesh State of India and Central Zone women’s cricket teams. She has also represented the Indore University women’s cricket team and served as captain of the Floor Hockey team for the State of Madhya Pradesh, India, from 1971-1974.

Jyotsna Patel was honored with a sports scholarship from 1972-1978 by India’s government, along with a four-year Government of India merit scholarship.

Ms. Patel has been honored and recognized for her professional and recreational endeavors, most notably by the professional Who’s Who organization in 2018-2019. A talented cricket administrator, she has served as a member of the Happy Wanderer’s Indore, M.P. India 1965- 1978, and a member of Gujarati Samaj of Tampa Bay, Florida, since 1991.

Among her many proud achievements is being awarded lifetime memberships of Madhya Pradesh Cricket Association (MPCA) in Indore, India, and the Indian Cricketers’ Association (ICA) of the Board of Control for Cricket in India (BCCI). She currently serves as a member on the Cricket Committee of USA Cricket. Professionally, Jyotsna Patel is a Senior Associate at World Financial Group, Tampa, Florida, where she has worked since 2014.

Jyotsna Patel sums up her life goal in a straightforward sentence, “My goal is to promote girls and women’s cricket in the world, and to be a part of it.”