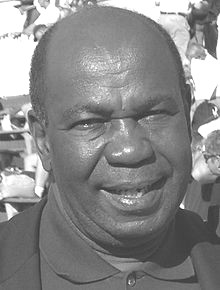 John Shepherd enjoyed a career extending over two decades in which he excelled in domestic cricket in West Indies, England, Australia, South Africa and Rhodesia.
A nagging swing bowler and hard-hitting lower-order batsman, Shepherd played the first three of his five Tests against England in 1969, ending the series with 12 wickets at 22.16. He appeared twice more against India in 1970-71 but on the less helpful pitches he was less effective. In 1973 he toured South Africa with DH Robins, and as a result never played in the Caribbean again (he only played one full season there anyway) although he did make two more trips to South Africa as well as playing one season for Rhodesia in the in the South African Currie Cup and was voted one of Wisden’s Five Cricketers of the year in 1979.
John also played club cricket in Melbourne Australia, winning the prestigious Jack Ryder Medal in the 76/77 season as Cricketer of the Year. By then he was already established at Kent, where he played for 15 seasons before in 1982, aged 38, moving to Gloucestershire where he continued to impress for six more years. After eventually retiring, for seven years he was the cricket professional at Eastbourne College in Sussex, and in March 1998 was appointed the Regional Development Officer for the Americas region, based at the West Indies Cricket Board in Antigua.
In 2011, John was selected by members and the local press as one of 12 Kent Legends to be commemorated in a special walkway at the Kent CCC ground in Canterbury. Earlier the same year John was elected President of Kent CCC, an honour few players have been accorded.