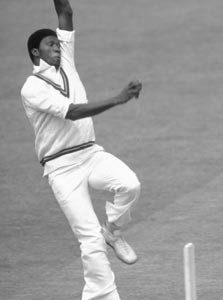 The strapping 6’8” Barbadian, Joel “Big Bird” Garner, remains a firm fixture in cricket’s history books. He was one segment of a fearsome foursome that devastated batsmen of the world and propelled West Indies cricket to unchartered heights. He was one of Clive Lloyd’s primary weapons in the region’s domination of Test cricket during the 1980s.
For a man who took only seven 5-wicket hauls and no 10-wicket hauls during his Test career to finish with a total of 259 wickets in 58 matches, is nothing short of astonishing. It spells consistent wicket-taking of the highest order.
Garner never had a 14-wicket match haul like Michael Holding or twenty-two 5-wicket hauls like Malcolm Marshal or Curtly Ambrose but only Courtney Walsh has exceeded his consistent wicket taking.

His 258 wickets in 59 matches over a period of 10 years from 1977-1987 started on his home ground at Kensington Oval and was curtained at Christchurch, New Zealand.

In 98 One Day matches Garner bagged 146 wickets at an average of under 19. Underlining his meanness as a bowler was the fact that only once did he go for more than five runs an over in his career. Three times did “Big Bird” bowl six overs for six runs, once for 7 runs and three times for 10 runs. These figures represent his miserly bowling statistics.
More often than not, Garner bagged stuck to delivering precision dynamite to opposition batsmen. His averages in both forms of the game tell the tale of his consistent precision. In Tests he averaged 20.97 and in One Dayers he finished at 18.84. Not too many bowlers worldwide boast better career averages.
Batsmen would say that the overriding feeling when first confronted by the “Big Bird” was that he would trample on them such was the foreshortening effect of his 6ft 8ins. Delivered from the clouds it seemed, and at a lively pace that when the mood took could be cranked up to the brisk side of rapid, the ball would rear alarmingly from barely short of a length. Allied to that was the most devastating toe crunching Yorker the game had seen since that of Charlie Griffith.
Of the top wicket-takers, few have a lower average than his parsimonious 20.98. If his value in Test cricket was as an integral part of the most formidable pace attacks ever - they spread the load so that he took five wickets in an innings on just seven occasions - then in one-day cricket, particularly in the overs at the end of an innings, when the unhittable Yorker speared in relentlessly, he was priceless.

“At Lord’s in 1979 he simply blew England’s slim hopes away with 5-38, the best figures ever in a World Cup final” - Mike Selvey
The Cricket Hall of Fame is honored to have Joel “Big Bird” Garner join the ranks of the other cricket stars who have been enshrined in the prestigious institution.