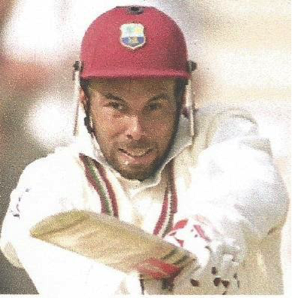 James Clive Adams (Jimmy Adams) is a former Jamaican cricketer, who represented the West Indies as player and captain during his career. He was a steady left-handed batsman, useful left-arm orthodox spin bowler, good fielder, especially in the gully position and an occasional wicketkeeper when required. He retired from all cricket in 2004 after a 20-year career, ending with a Test batting average of 41.26 with a highest score of 208 not out against New Zealand at St. John's, Antigua and Barbuda in 1995.

Adams was called into the Jamaican squad for the 1984/85 season as a teenager and enjoyed a good if unspectacular start to his first-class career. He continued his cricket career for a couple of years after the year 2000, captaining South African provincial team Free State and making guest appear- ances for Lashings World XI in England.

It wasn't until the 1991/92 season that he was called into the West Indies Test squad for the first time, making his debut against South Africa at Bridgetown, Barbados. In his opening 12 matches Adams scored 1,132 runs at a batting average of near 87, a record bettered only in the history of Test cricket by Australian Sir Donald Bradman. In the first half of his Test career, Adams averaged 61.34 compared to 25.58 in the second half, this differential is the largest in Test history. In the mid-1990s he began to struggle at international level. In a tour match against Somerset, he was hit by a bouncer by bowler Andre Van Troost, shattering his cheekbone. In 2005 and 2006 he played for Dunstall CC in the Derbyshire League.

Adams was appointed as West Indies captain in 2000, replacing Brian Lara. He would not last long, leading the team to a 5–0 series loss on the 2000/01 tour of Australia. After the tour he lost both the captaincy (to Carl Hooper) and his place in the national team. News of his impending termination was broken to him by friend and national TV reporter, Peter Furst. The ever-cool Jamaican simply responded, ̈Have you heard something I haven't? ̈ He then reflected on his career, saying that what- ever happened, it had all been a blessing – both the good and bad. Adams ́ grace in the face of what would crush many a lesser person reflects the nature of the man; a cricketer whose best attributes can never be recorded on the score sheets.

Having served as West Indies' U-19 manager, Adams was appointed as the head coach of English county team – Kent - in January 2012, a position that he served in for five years. He is also the President of the Federation of International Cricketers’ Association (FICA), a position he has held since 2008.

Adams, who turned 50 in January of this year, took over as the director of cricket at the West Indies Cricket Board on Monday, January 30, 2017. He replaced Richard Pybus, who opted to not renew his contract after having served in the role for three years. Adams accepted the job which the WICB stated at the time that his contract was for three years.

"Jimmy thinks the timing is right for his new role with the WICB," the WICB media release said. Adams said he was looking forward to contributing to the growth of West Indies cricket. "I am very excited to be directly involved in Caribbean cricket once again, and I look forward to working with all those committed to moving the game forward in the West Indies."