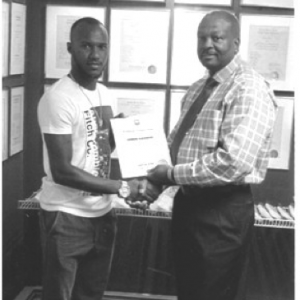 Upcoming young West Indies middle order batsman Jermaine Blackwood recently paid a visit to the Sportmen’s Athletic Club and the Cricket Hall of Fame, Hartford, Connecticut. In a brief reception held in his honor at the Hall, Blackwood who was making his second visit to Hartford was presented with a Certificate of Appreciation in recognition of his outstanding performances in the recent series against England which ended in a 1-1 tie.

Michael Chambers, President of the Hall of Fame, welcomed Blackwood back and reminded the gathering that for him (Blackwood) to have scored a century so early in his Test career was no surprise.

“We watched Jermaine score a century in a Connecticut Cricket League’s (CCL) game while he was playing for Sportmen’s,” he said.

At age 15, Blackwood was among a group of schoolboys who came to Hartford from Jamaica to play in the Connecticut Cricket League’s competition. During the tournament Hartford fans were able to get a glimpse of his talent while he played for Sportmen’s.

At the reception in response to the praises that were showered on him, Blackwood explained how grateful he was to be back in Hartford. He said that he was very confident of his ability to play the game and is convinced that it was his hard work and dedication that eventually led him to gain a place on the West Indies team. He also paid tribute to the senior players on the team for the role that they played in helping him to improve, and said that he had benefitted from their counseling.

“Money was a good incentive for anyone to get involved with the game,” he said, “but mastering the long format of the game was most important to him. My fondest moment was receiving the news that I was selected for the Test team and to then receive my Cap from icon Brian Laura,” he said.

In response to a couple of questions which included what he thought about the future of the sport in the West Indies, Blackwood said that it was very good and that the talent pool in the West Indies at the moment is excellent. He also said that he usually gets a chance to talk with the legends like Sir Vivian Richards, Ambassador Courtney Walsh, Clive Lloyd, Sir Curtley Ambrose and Sir Richard Richardson, to name a few, who were always visiting the locker room and mentoring them.