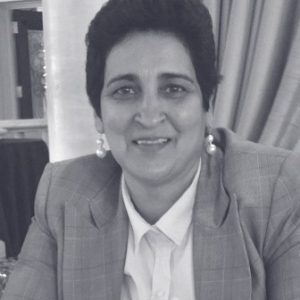 Mrs. Ivy Mahabir is a founding member of women’s cricket in the United States of America. A woman, who it is said eats, sleeps, and dreams cricket, has worked tirelessly to promote the growth and development of the sport in the U.S.A. Whether it is scoring, writing, umpiring, playing, or coaching she is always involved with cricket. The only thing in the sport that she has not done is commentate and if given an opportunity she will be very happy to do so. Although she participates vigorously in the playing of the game, she has also taken the opportunity to pursue her interest in business by attending the Montclair State University (MSU) in 2009, where she graduated with MBA degrees in International Business/Management, with honor. At Montclair State School of Business, she was a member of the Management Club, International Business Club, Financial Management and Economics Society, and the International Student Club.
Mahabir’s desire to get the sport moving along has led her to acquire not only business degrees but also various positions in the running of the game. With the assistance of the Student Government Association at MSU, she founded the first-ever cricket club at the university. This university has been in operation since 1908. She is the first and only female cricket umpire in the Garden State Cricket League -- from 2005 to the present, and the Millennium Cricket league from 2007 to 2011. She was the first woman coordinator for the Atlantic Region Women’s Cricket League (2007-Aug 2010), and a contributor to Local Talk Newspaper and Newark Newspaper – Sports column. She covered both the Millennium and Garden State Leagues from October 2007 to 2010.
In March 2009, she played her first first-class game in the U.S.A for the Atlantic region with stats of 27 runs not out and a bowling spell of 8-1-23-2. In May of that same year, she represented the first United States Women’s Cricket team in the MAQ T20 tournament. The team placed second in the tournament. In September of that same year, she was given a Certificate of Appreciation by MAQ for her participation in the tournament, where she also served as an umpire/official. A founding member of the Local Talk cricket team and the Public Relations Officer of Garden State Cricket League, that same year (2009), she participated and fulfilled the requirements as a Level 1 coach that was held in acquaintance with the West Indies Cricket Board, as well as the United States of America Umpires Association.
Mahabir was also a founding member and coordinator of the Atlantic Region’s first women’s cricket team, which she took to California to participate in a regional tournament. She was the captain of the team. She was also the Vice-Captain of the first Hollywood Women’s Cricket Team that played in the MAQ T20 competition, the first U.S. Cricket Open. In March 2011, she got the opportunity to play on the Golden Oldies cricket team of Los Angeles against a male Sri Lanka team and was honored to be the first woman captain of the Golden Oldies team. In May of that same year, Mahabir attended the first Atlanta Women’s T20/20 tournament, where she captained the Hollywood Rebels Women Cricket Club. She got two wickets and made 19 runs not out.
In July, she played in the national tournament where she captained the Hollywood Rebels and got a total of six wickets while playing in two games. In 2015 she successfully completed the Umpire Level 1 course through the England Cricket Board Association (ECBA), and eventually became the first female Vice President in the male-dominated New Jersey Umpire’s Association. Presently she is enrolled with the (ECBA), studying for the club-level scoring exams.