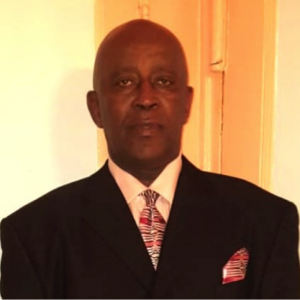 Hugh Stanley Blackman, better known as ‘Stocky Blackman’, is from the island of Barbados in the parish of Christ Church. At the age of 14 he repre- sented the Princess Margaret Secondary School in the Ronald Tree Under 15 Cricket Tournament in which he scored over 400 runs in 10 games. Due to his exceptional performance in the tournament he received an invitation by the Barbados Cricket League First Division Club the following year. At that time, the club was selecting players for the tour to England to play in exhibition games, but unfortunately, he was not selected. In the same year he was also invited to the National Under 19 Cricket tournament but was also unsuccessful.

When he was 17, he was invited to the Barbados YMCA to play Second Division cricket. The season had four games remaining and, on his debut, he scored 100 runs. He finished the season with over 350 runs. The following year he advanced to the Intermediate Division in which he scored approximately 600 runs which included two centuries.

Stocky migrated to the US in 1976. Later that year he was introduced to Modern Cricket Club, in the Long Island League, by Wilmar ‘Putty’ Thomas in which he played two seasons from 1976-1977. He then joined the Somerset Cricket Club in the American Cricket League in 1978. On the field he was an opening batsman, a right arm medium or slow bowler and an all-rounder fielder. He played for 12 seasons and scored over 15,000 runs with over 40 centuries which included four double centuries. During those years he received countless awards and trophies for outstanding performance.

In 1990, during his last season with the club, he received the Sportsman of the Tri-State Area Award. In 1985, while playing for Somerset, he received an invitation for tryouts from the USA Cricket Association in which he was successful. He represented USA in the ICC Tournaments for 10 years, playing in England in 1986, Holland in 1990, Kenya and India in 1994. During those 4 tournaments he scored more than 500 runs.

In 1994, he joined with others in forming the Kingsgrove Cricket Club in the American Cricket League. One year later the club acquired land in Seaview Park, Brooklyn, New York, which became the club’s official cricket grounds. For the club’s first season he was captain and held that title various times throughout the years. He played with the club for 15 years and achieved many awards in batting, bowling, and fielding. Throughout his 50 plus years of playing cricket, his most memorable moments were in July 1987 while playing an exhibition game with the North Eastern Cricket Association against the West Indies Select XI team at Mount Vernon Stadium, USA. In that game he bowled out Clive Lloyd and scored 68 runs. He was also named man of the match. The two-day tournament was featured in the Cricket World Magazine pub