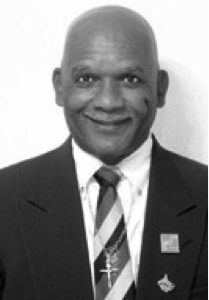 AT THE ICC LEVEL IN AMERICA

has chalked up an impressive list of accomplishments since he began officiating in 1985. Born on May 17th 1941 in St. Thomas, Barbados, like most children at the time, Hammy played and learned the basics of the game of cricket in the local back streets.

In 1961, he migrated to England and worked for London Transport as a bus conductor at Catford Bus Depot, a job which he held for more than 10 years. While employed there, he joined the cricket team and played as an opening batsman and wicketkeeper. Hammy also attended South London College and in 1978 he received the City & Guilds certificate with credit as a radio and television engineer.

In 1981 he arrived in New York and immediately joined Somerset Sports club, where he played as an opening batsman and wicketkeeper for a number of years. In 1982 he started working for New York City Transit authority (NYCTA) as a car inspector. Twenty-five years later he retired from the company.

Hammy began to take the job of umpiring very seriously shortly after joining the Transit Company. He attended umpiring seminars in 1985 and started umpiring in the American Cricket League. In 1989 Hammy was selected to officiate in a promotional game at Memorial Stadium, NY (West Indies vs India) with the late David Archer, a former West Indies and Barbados umpire.

The United States of America Cricket Umpires Association (USACUA) was formed in 1992 and Hammy jumped on board immediately. That year also saw Hammy and Clyde Cumberbatch (West Indies and Trinidad & /tibagi umpire) officiating in another promotional game (West Indies vs India) at Downing Stadium, New York. In 1994 he was made an honorary member of Unity Sports and Cultural Association of Boston, Massachusetts.

In 1997 Hammy passed the West Indies final written and oral umpire’s examinations and was also selected as a USA representative to officiate at the International Cricket Conference’s (ICC) trophy tournament in Malaysia. This position he held for seven years. In 2001 he was again selected as a USA umpire at the ICC trophy tournament held in Toronto, Canada and in 2002 officiated at the Second Americas Cricket Championships in Argentina and at the Under-15 championships held at Disney Wide World of Sports in Florida. In the years 2003 and 2004, Hammy officiated in USACA regional finals held in Houston and Dallas Texas, respectively. In 2006 he officiated at West Indies XI at Floyd Bennett Field, New York.

Hammy continues to share his knowledge of the game by coordinating free umpire seminars across America in such states as Florida, Massachusetts, Georgia and Connecticut. Married in 1964 to Athol, Hammy and his wife have three children, Sonia, Stephen and Shaun, who have blessed them with three grandchildren, Andrew, Daniel and Renee. With God’s help and permission Hammy pledges to continue to do whatever he can for the improvement of cricket in the USA.