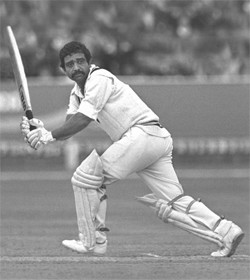 Among Test batsmen who have scored more than a handful of centuries, the only one who can claim that whenever he made a hundred his team either won, or the game was drawn, is the pint-sized genius from Bangalore, Gundappa Ranghnath Viswanath. Each of Vishy’s 14 test century resulted in either an Indian victory or a draw. No wonder, instinctively in the 1970’s fans always looked for a century from Vishy. The fact that a century from the other little master, Sunil Gavaskar almost seemed pre-ordained, and not likely to require supplication before the almighty, had something to do with it.
Like all stylists, the former Indian batting star Viswanath had the ability to both delight and frustrate his fans all within a matter of minutes. His wristwork was a joy to behold, both in his flicks to the on side and in his square cut, his pet shot, which he generally sent the ball whizzing away to the boundary. A short man (5’4”), his timing was impeccable. However, he also had an ability to get out, often indiscreetly, in his 30’s and 40s, leaving the crowd to imagine what may have been. When he married Gavaskar’s sister in 1978, it seemed for a for a while India’s batting was in one family.
Scorer of over 6,000 Test runs, his 97 at Madras vs the West indies in 1974-75, on a day when (in the presence of Andy Roberts) with fire, is still considered to be amongst the finest innings seen on Indian soil. He began his career with a duck and century on debut. Three years later, he and Hanumant Singh having failed earlier (later, Sunnder mamath and Amre joined this only debut club).