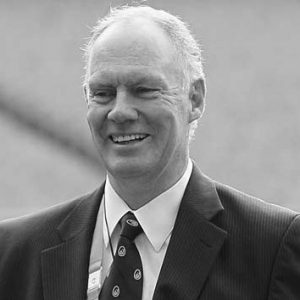 Greg Chappell was the outstanding Australian batsman of his generation. Though he had an appetite for big Outstanding Australian batsman scores, it was his calm brow and courtly manner that
bowlers found just as disheartening. He made a century
in his first and final Tests, and 22 more in between—although perhaps the outstanding batting of his career left no trace on the record books, his 621 runs at 69 in five unauthorized World Series Cricket “Super Tests” in the Caribbean in 1970, off a West Indian attack of unprecedented hostility.
Less empathic as a captain than his elder brother Ian, he nonetheless won 21 of his 48 Tests and lost only 13. He lost the Ashes in 1977, but reclaimed them in 1 9982-83. His feat of scoring centuries in each innings of his captaincy debut is unequaled. As a batsman Greg was more in the mold of the classical off-side stroke player than his brother Ian, but was an equally had competitor. Probably his trademark stroke was the drive between extra cover and mid off, hit with a straight bat and with such velocity that it left fielders standing. He played it against the best of bowlers, even Dennis Lillee, as Western Australia all-rounder Ian Brayshaw recalled from a one-day match in Brisbane.
Greg honed his game with a season at Somerset, England, when he switched from leg-spin to the nagging medium pace that was to be of such use to Australia in ODIs. He made his Test debut in the second march of a 1970-71 series, batting at number seven. He scored 108, becoming the sixth Australian to score a century on Test debut. In the 1972 Ashes he scored two centuries, including 131 at Lords. In New Zealand two years later, he made 247 not out and 133 in the same Test at Wellington, a match in which Ian also scored a pair of centuries. His brother stood aside to let take the Australian captaincy against the West Indies in 1975-76 and he scored a century in each innings of his first Test in charge. He captained Australia on their first visit to Sri Lanka. He made 201 against Pakistan in 1980-81. Greg played in the inaugural World Cup Final of 1975, when he was run out by Vivian Richards.