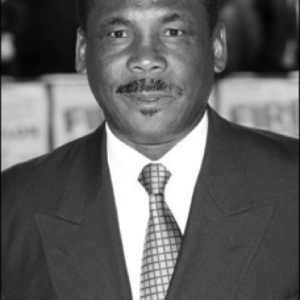 GORDON GREENIDGE was a feared opening batsman for the West Indies. Born in Black Bess, St. Peter, Barbados, he began his Test career against India at Chinnaswamy Stadium, Bangalore

in 1974 and continued playing internationally until 1991.

Half of the West Indies most prolific opening partnership with Desmond Haynes, Greenidge went on to play 108 Test matches scoring 7,558 runs with 19 centuries. He also played 128 One Day Internationals, including the 1975 and 1983 World Cup Finals, scoring 5,134 runs and 11 centuries. He shared in 16 century stands, four of them in excess of 200 with Haynes.

Brooding and massively destructive, the power of Greenidge’s stroke-play on any given day appeared to bear a direct relationship to the degree that he limped when running between wickets.

In such a mood he didn’t run much anyway and his brutal unbeaten 214 at Lord’s in 1984, to set up a nine-wicket win after England had had the temerity to declare, is considered one of the great innings. He followed this up with 223 runs during the fourth Test at Old Trafford during the last five days of July, cementing his place in Test cricket history. The first of those innings was on the last day as West Indies successfully chased 342 for victory. It remains the highest run chase ever at Lords.

Greenidge was a superb technician, who learned solid defensive techniques on the pudding pitches of his childhood in England and then allied them to an uninhibited Caribbean heritage. Attacking was in his genes. Never in the game has there been a more withering and dismissive square-cut, nor a more willing and able hooker and puller, but he drove mightily too on both sides of the wicket.

He also played many seasons for Hampshire in the English County championship, and for many years opened with Barry Richards to form the most feared county opening pair. He began his first class cricket career there before he played for Barbados and could have qualified for England. Late on his career, he appeared for Scotland. In his career he scored 37,000 runs and 92 centuries.

Greenidge is regarded as one of the best batsmen to represent the West Indies in international Tests and was a member of the West Indies selection committee for Test matches. At the end of his playing days he became a successful coach guiding Bangladesh in 1997 to become champions of ICC Trophy in 1997.