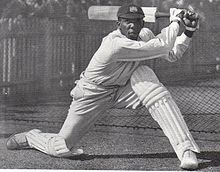 Between 1929 and 1939 Headley never failed in a series of Tests. In the interval between the wars only the computing Bradman surpasses his figures. And there are considerations which no mechanical calculations can adequately register. For almost the whole of his career Headley, going in the first wicket down, knew that if he failed to score or merely to stay, it was problematical whether his side would reach 150. He was born in 1909 in Panama where there is a substantial West Indian community, originating from the numerous West Indians who went there at the beginning of the century to help build the Panama Canal. His early game was rounders. The national language of Panama is Spanish and in 1919 his mother took him to Jamaica where she was born so that he might go to an English school. There he was introduced to cricket and soccer and took to cricket, sometimes playing without stopping for meals, with homemade bats and balls. At school, he used man-sized bats so he held the handle with one hand and the blade with the other. He was devoted to cricket, watching visiting cricketers like Ernest Tyldesley and Percy Holmes, and working his way up. Yet he had his ticket ready to leave for the United States to study dentistry.

There was, however, a long delay in getting his passport from Panama, and an English team arrived before the passport. Headley was chosen and not yet 19 years of age made 78 in the first match and 211 in the second. Gradually he came to know that he would prefer to stay
and play cricket rather than go to the United States to study a profession.

In 1929-30 the MCC sent a team to the West Indies to play four Test Matches. In the First Test in Barbados Headley made 176 and scored a century in each innings of the last Test at Georgetown.

He went in 1930-31 to Australia, began brilliantly, and after a period in which the Australian concentration on his leg-stump bothered him, mastered the Australian attack to such a degree that Grimmett considered him the finest one-side player he ever bowled against. Headley went to England in 1933 and again in 1939. He was a master of English bowling, achieving a remarkable climax to a remarkable career by making a century in each innings of the 1939 Test at Lord’s.

He was essentially a back-foot player but made all the strokes and except when over-weighted with responsibility always attacked bowlers. His record on wickets affected by rain is notable even for a great batsman. He bowled leg-breaks with great assiduity whenever he got the chance and fielded finely anywhere.

After the war, he played odd games in one or two series but was never his old self. He continued for years, however, to be a notable performer in League cricket in England. He is now employed by the Jamaica Government as a cricket coach.