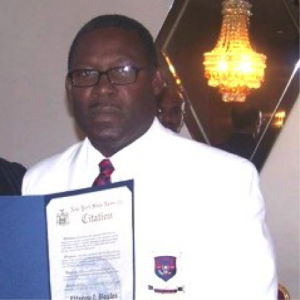 in charge of the umpires’ affairs for Canada, Cayman Islands, Bermuda, Jamaica, USA

and other ICC Americas territories. Associate / technical advisor to the Public School Athletic League (PSAL), and assignor

in charged of umpires’ affairs since its inception

As secretary of the USACUA, formulate and submitted proposal to the USACA, and over- saw the transformation of development of the USACUA from a tri-state association to a unified body incorporating all umpiring bodies within the USA. Oversaw the expansion of the USACUA from 85 to a membership of over 500 umpires over the last 15 years.

Was an integral part of the USACUA Training faculty, wrote and administered assess- ments and certification of all umpires within the USA and other WICUA territories.

Conduct assessments as external examiner on behalf of the WICUA. Served as the USACUA representative to ICC and other International affiliations. Organized and supervised the hosting of the 27th Bi-ennial Convention of the WICUA, considered the most successful every held under the auspices of WICUA. Currently serving as the USACUA representative to the New York Cricket Region

Veteran Cricket Umpire Administrator Fitzroy Hayles was re-elected President of the United States of America Cricket Umpires Association, Inc., at the association’s Annual General held on Sunday, Feb- ruary 15, 2015 in Brooklyn, NY. The certified WICB and ICC recognized umpire will lead the body for the next two years. http://newyorkcricket.com/news/2015/02/new-yorker-fitzroy-hayles-re-elected-president/

I am very aware of the roles and responsibilities that is entrusted upon me as a Cricket Hall of Famer, but will do whatever is expected to reciprocate the faith that is shown in me. I will do all within my powers to show that I am a worthy member for such high office.