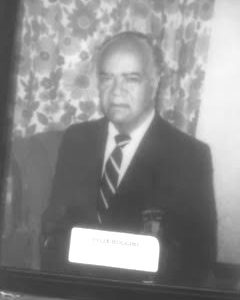 Born May 30, 1910 in Port of Spain Trinidad. Immigrated to the United States in 1930. Mr. Huggins since then has been credited for many achievements including: Best Bowling average in the Intermediate League in 1930 with bowling average of 4.2. selected to play Vs Australia in 1932. A team that included the great Sir Don Bradman. Has played against: A West Indian Team, A Bermuda XI and against a West Indian XI on tour with players such as: George Headley, Bam Bam Weekes and others.
In 1945 Mr. Huggins returned to New York to resume his cricket career and continued to achieve such feats as, Cap of Captainry for many years. He was involved in the Federation Tour to Jamaica in 1964.
Mr. Huggins was President of the Staten Island Cricket Club. These and other accomplishments made Huggins one of the outstanding promoters of cricket in the United States.