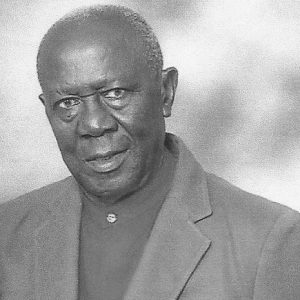 t is said that cricketers do not die, they just fade away. An individual, who fits into this category, is Emmanuel Pierre Lewis, who at the age of 85 is still turning the ball. Well known in New York and the Florida cricket circles, Lewis, who celebrated his 85th birthday on May 17, and who is still very active in and playing the game that he so passionately love, is possibly the oldest person in the region still playing the game.
One of the regular participants in the Michael Holding Masters Tournament which takes place in Jamaica each year, Lewis who was born in Diego Martin, Trinidad on May 17, 1929, and began playing the game at a very young age is recommended as an excellent candidate for the “Golden Age Award” which will be presented at this year’s Cricket Hall of Fame’s Induction Ceremony, that is scheduled for Saturday, October 4, at the Hilton Hotel, Hartford, Connecticut
There is a spark that surrounds him whenever he is out on the field whether bowling or batting and running twos, the old-fashioned way, some of his colleagues said. With his passion and dedication to the sport, Lewis who shows no signs that he is ready to quit playing, is currently working with members of the New York Mets farm team in Port St. Lucie, Florida, in conjunction with the St. Lucie County School Board to help bring awareness and the fundamentals of cricket to the children. He is truly an ambassador for the sport and deserves the honorable reward of an induction into the Cricket Hall of Fame, his nominator said.
Before migrating to the U.S., Lewis played with various teams in his native Trinidad, all of which were successful. Tagged with the nicknames “E.P.” or “Manassa”, Lewis started his career at Paragon Sports Club in Trinidad in the 1940’s as a teenager. As he fondly remembers he was a “country boy” fetching balls for the pros, when former West Indies’ opener, the late Conrad Hunte noticed this little left-hand spinner and became interested in his talent. Hunte then pointed him out to former West Indies’ captain the late Jeffery Stollmeyer, who was also present.
Lewis played his first game in the U.S. in the Bustamante Cricket League in New York in 1966 and continued to play in the league until the 1970s. He was instrumental in having the league’s name changed to All American Cricket League. In his five seasons in this league, Lewis accumulated several bowling, batting and fielding feats which still exist in the record books in New York.
“E.P.” remembers playing cricket in Van Courtland Park in that state as well with cricketers like Victor Reeves and Selwyn Caesar. One of the clubs he represented was New Rochelle, where he was Best All Rounder. He was also a member of the Virgin Islands team in 1979/80.