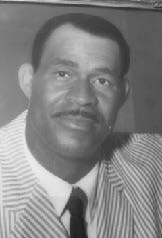 When young Dudley Lloyd Jones arrived in Florida from his native Jamaica in 1944, he found that there was no organized cricket played in that part of these United States. He spent four years there playing in randomly organized games throughout the Ever-glades and honing up on his skills as a medium-fast bowler who could bowl the in-swinger and out-swinger with predicable accuracy. In 1949 young Jones was on the move again - this time to Surgeon Bay, Wisconsin, where he had his first experience of playing on a natural grass wicket. While there were no leagues around, the activity that surrounded cricket was a bit more intense, and he was able to play in the cities of Champagne, Gibson City, and Rochelle, Illinois, as well as in other cities. Young Jones earned the respect of his peers and was quickly becoming a celebrity. In 1950 he came north to Hartford, Connecticut. In 1953 he joined the West Indian Social Club and through 1956 only played on rare occasions.
In 1956 he was selected to play against the powerful Windsor Cricket Club of Boston, Massachusetts. His Captain, Alonzo Smith, handed him the ball and said, “I know that you can bowl, go to it.” His figures for that day were 6 for 13. A star was born. His heroics continued as he became the work horse of his team’s attack. He eventually became a local legend. Necessity eased him into the position of opening batsman where he displayed immense power in being able to dispatch opposing bowlers with ease to all parts of the boundary. His onslaught was so frequent that on a weekend fans would go to the old Keney Park field just to see Dudley bat.
A teammate, Cleveland Collins, once called him D.J. and the name remains with him till this day. After serving five years as Captain of the West Indian Social’s Team, D.J. resigned and was later instrumental in forming the Sportsmen’s Athletic Club where he continued his legendary feats until his retirement to go into business for himself in 1970. D.J. has left us a legacy for which we shall be ever indebted. Dudley and his wife, Betty Hughley formerly of Tuskegee, Alabama, presently reside in Hartford, Connecticut.