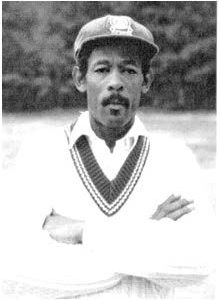 After fulfilling his cricketing ambitions in Jamaica by first representing Kensington Cricket Club (local level), Jamaica (national level), and the West Indies (regional level), Desmond Michael Lewis’ paternal instincts became overwhelming. He began to focus his attention on the opportunities for his three young sons. He reasoned that the United States would be the best country for them to seek self-actualization. Desi, as he is affectionately called, with his wife Marjorie and their three sons, Desmond Jr., Phillip and Christopher migrated to Atlanta in 1978. Subsequent to the family being settled and secure, Desi’s social and recreational life, not surprisingly, started to revolve around cricket once again.
In 1984, he became a foundation member of the Atlanta Cricket Club. This great and noble game was off and running in Atlanta. They played their first match in Valdosta Georgia and also played friendly matches in Texas and Tennessee. By 1985, the competitive juices within other cricket enthusiasts were manifested and that spirit of thought resulted in the formation of the Atlanta Cricket League with four teams. They were players from Guyana, India, the Combined Islands, and Jamaica.
Being dissatisfied with the direction of the Atlanta Cricket Club, Desi along with his compatriots Everett Johnson, Junior Williams and Lascelles Buchanan founded Tropical Sports Club in 1986. By any barometer, this event can only be described as fortuitous and magnanimous as to date, Tropical Sports Club has achieved a remarkable and enviable record of success not only on the cricket field but more importantly in community development especially in educational support for youth. It has set the standard by which other clubs are judged. These successes have been achieved under the stewardship and leadership of Desi who had remained a pillar of strength and a person who commands the utmost respect not only within the organization but also within the wider cricketing community in North America. Purely from a cricketing perspective, it is instructive and important to note some of Desi’s milestones. Ironically, Tropical lost the championship match to Atlanta Cricket Club in the inaugural year. Unbelievably, they won for the next 16 years from 1987 to 2002.
Desi was the vice-captain and wicketkeeper during the historic period. Next, he entered into what should be described as a semi-retirement period. He served as player/ coach but his main focus turned in coaching both entities until 2009 when, unfortunately, he sustained a serious injury during an ice storm. Although this has affected his mobility, he continues to act in an advisory capacity, disseminating his Solomonistic wisdom both to Tropical and the league. He is especially proud of his contribution as a foundation organizer of cricket in Atlanta. The city now boasts two leagues with approximately 35 teams. We are fortunate beneficiaries of his exploits.