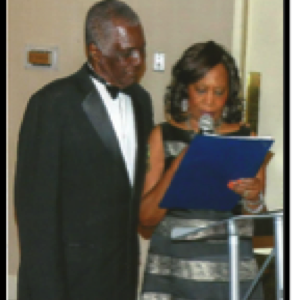 Family, friends and a host of well-wishers showed up at the Holiday Inn Hotel in East Hartford on Friday, June 30, to help well-known businessman and community leader Dermoth Brown celebrate his 80th birthday. Tributes were paid to Brown for his admirable character traits and the skills that he always displayed whenever he is involved in helping with the start-up of local organizations and businesses. He

Highlighting the program were tributes from his grandson Ethan Brown-Thompson, who recited a poem “IF” by Rudyard Kipling and a musical rendition by State Representative Edwin Vargas, on the guitar. Mr. Vargas later spoke eloquently of his association with Brown, who he said that he has known for many years. Vargas then presented him with a Proclamation from the General Assembly of the State of Connecticut.

Hartford City Councilwoman Gwendolyn L. H. Thames, spoke about her work with Mr. Brown and the positive influence he inspired, before presenting him with a citation from the Hartford City Council. Other tributes and presentations of citations came from Governor Dannel Malloy and Mayor Luke Bronin, who sent their regrets for not being able to attend the function. Marc Nelson, current president of the Board of Directors of the Artists Collective praised Mr. Brown for his dedication to the Collective as a board member for nearly 40 years.

In response Mr. Brown, could hardly stop thanking all those in attendance who he said had helped him along the way. Mr. Brown, who was born in Jamaica, was a recipient in 1987, of the Prime Minister of Jamaica’s Medal of Appreciation for his service to Jamaica abroad.