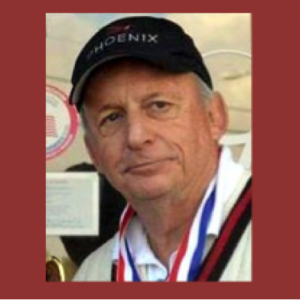 David Sentance has played cricket on five continents and has been based in Los Angeles, California area for the last 40 years. Starting in Kenya for Impala Cricket Club and Nairobi Schools, he played for the King’s School, Grantham First X1, and Grantham CC, before moving to the US, where he was surprised to find cricket being played in Los Angeles.

Sentance played for UCLA and toured Eng- land with the University Cricket Club in 1976. By 1990, having captained the Victoria CC in the Southern California Cricket Association, he co-founded and captained the World’s first Homeless Cricket team – the Los Angeles Krickets in 1995. David became SCCA Treasurer in 1996 and USA Women’s team selector in 2009. The US Women defeated Brazil and Argentina. The women’s team development was the culmination of the Los Angeles schools program in 1996. In 1999 David met Ashok Patel in New Jersey when he travelled with California players to the USACA Under-13 trials held at the US Cricket Academy.

The California schools program lasted three years before re-defining itself as an inner-cities schools’ program in Watts at the Sheenaway School. New cricket coaching techniques were pioneered in Watts with the help of several LA Krickets participants including Leo Magnus, Mustafa Khan, Mark Azeez and Stephen Speak. Sentance wrote about the experience in his book Cricket in America 1710-2000 (McFarland, North Carolina: 2006). Lloyd Jodah, the founder of American College Cricket, has noted the book as one of the sources of inspiration for founding his college program.

In 2000, cricket changed in the United States as large numbers of young IT engineers (digirati) from India brought a renewed passion for cricket to America with them. Consequently, cricket softball mid-week leagues sprang up in Southern California in locations such as Simi Valley and Westchester, which fielded teams from Farmers Insurance and Direct TV. In New Jersey, a similar story could be told for the Indian community that settled post 2000, around Edison. Cricket academies sprung up to cater to the needs of “serious cricketers.”

Additionally, as Indian students were drawn to America for education, the American College Cricket (ACC) movement began in 2009 on Lloyd Jodah’s initiative, to provide a competitive format for over 70 college teams. Asked to join the American College Cricket in an advisory capacity, David also joined the ACC broadcast team offering a unique American perspective based on eight years of primary research in the US. Matches between colleges proved so popular investors funded cricket culminating in an ESPN2 broadcast of American College Cricket finals live from Broward Stadium in Fort Lauderdale, Florida in 2013. Joining the broadcast team with Lloyd Jodah and Jamie Paul Lloyd, David has helped to expand the market for cricket in the United States. Having worked in an executive capac- ity for the British – American Chamber of Commerce, the SCCA, and the Los Angeles Krick- ets, David Sentence is President of the Southern Junior Cricket Program and an ACC board member.