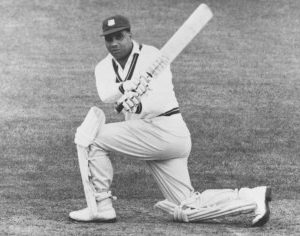 He was a member of the famous 3 W’s (the late Sir Frank Worrell and Everton Weekes are the other two) and he holds a Test Match batting average which includes: 44 tests; 74 innings, Not Out 7; total runs 3,798; highest score, 220; centuries, 15; average 56.68.
Clyde Walcott has served as the Past President of the Barbados Employer’s Confederation; a past member of the Barbados Public Service Commission and is a Past President of the Guyana Cricket Control Board.
At present he is the Chief Personnel Officer and Parent Board Director of the Barbados Shipping & Trading Co. Ltd. He is married to Muriel Walcott and they have two sons.
Clyde Walcott has received an A.A. - Golden Arrow of Achievement Award from Guyana and holds the prestigious O.B.E. - Most Excellent Order of the British Empire.