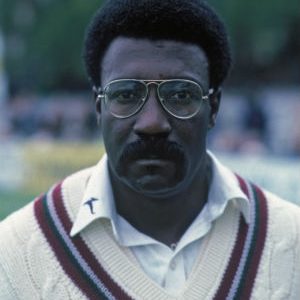 CLIVE HUBERT LLOYD is almost certainly the best-known contemporary West Indian, even in those countries where cricket is not followed with such fervor as it is at home. Statesmen appeal solely to the politically-minded section of society, and entertain-ment “super-stars” essentially to the young, but Lloyd’s appeal is to the entire community. Last summer he was captain of the West Indies side that became the first visiting team ever to win all five Test matches of a series in England since international competition commenced. It was only one of the several records that the region’s cricketers have achieved under his leadership.

The Guyanese left-hander forced his way into the strong batting line-up of the triumphant team of the mid-1960’s and later was required to hold the side together when it broke up under the impact of advancing age, world weariness and frustration. At that time he was known primarily as a powerful middle-order batsman, more than useful change bowler, and probably the best fieldsman in the world. Yet his natural movements showed the shambling gait of a domesticated bear. The appearance was deceptive.
At first the decision to replace veteran Rohan Kanhai with the untried Clive Lloyd as captain for the tour to India in 1974/75 was unexpected. Outside of Guyana he had been hardly considered as having leadership potential. By inspiration and example - he hit his own highest Test Match score of 242 not out in the deciding encounter at Bombay - Lloyd led to victory a generally young side, some of whom, including Gordon Greenidge, Viv Richards and Andy Roberts, went on to become household names and to stay with him throughout most of his captaincy.
Familiarity has brought quiet recognition of his achievements which in other circum-stances would have been quite startling. Under his leadership the West Indies won the Prudential “World” Cup twice, remained undefeated in any series at home, took a rubber in Australia for the first time ever, and established their credibility as not only the champion side of their own generation but as arguably the greatest combination every to grace a cricket field anywhere at any time. He lost control of the situation only once, in Australia in 1975/76; it rankled and it was avenged.

In recent years Lloyd, batting at the fulcrum position of No. 6, has been over-shadowed as a run-scorer by Richards, Greenidge and Larry Gomes. Yet time and again he has put backbone into the middle-order and the “tail” whenever the opposing bowlers have made early in-roads into the batting. Instead of dominating the action as in his own powerful young days he has done everything to support and guide the younger batsmen. Since the injury to his knee which threatened to curtail his career, Clive has moved from the covers to field at slip, where he is supreme.
Lloyd’s leadership is beyond dispute, and only Sir Frank Worrell of all his predecessors is compared with him on level terms. There are however few outward signs of his inner strength. Unlike other captains he has not lost the common touch. Followers of the game from Barbados to Brisbane, Trinidad to Trent Bridge consider that he has acted as they, themselves would have acted if they had his experience and position. He has achieved so much without sacrificing his gentle and approachable personality to traits such as the ruthlessness of Ian Chappell, the seeming arrogance of Imran Khan, or the aloof detachment of Mike Brearley.
The loyalty which Clive has inspired in the cricketers under his direction has steered the West Indies safely through two of the most trying crises ever to afflict the international game. The West Indies, alone among the major powers, were not rent apart by the schism of World Series Cricket, because all but one of the established players followed his lead. His steadfastness, persuasion and example dissuaded all but a token handful of current world-class cricketers from joining the so-called “rand rebels” in South African competition.
In retrospect Lloyd’s greatest achievement may be seen as holding the regional side together at a time when the individual Caribbean territories have been making their own, often divergent ways in the contemporary world. Clive Lloyd, though regarded initially as Guyanese, has come to symbolize the West Indies in a way nobody in any other walk-of-life has been able to realize. It is not entirely unfair to surmise that without him at the helm of the cricket team the Caribbean generally will seem to be less of a regional entity.