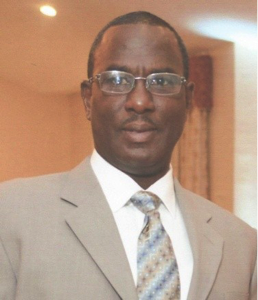 Cliff Roye was born in the beautiful island of Jamaica, in the parish of Manchester. His love for cricket began at the early age of five in his garage with his older brothers. Cricket was his number one sport through- out his school days.

After graduating from Junction Secondary in St. Elizabeth, he went on to join the Jamaica Defense Force (JDF) and began playing in the Junior Cup competition. In 1988, he started playing Senior Cup for the JDF and in his first game made 198 runs; the highest individual score made by any player for that year, earning him the “Ken Weeks” Cup.

In December 1991, Roye migrated to the USA. In 1992 he joined the Westbury Cricket Club under the leadership of the late Roy Sweeney. His contributions to the team led to the club winning the Busta Lawrence Trophy that year. Roye’s journey at West bury Westbury lasted for 17 years where he was instrumental in the team winning 11 championships. He held the Metropolitan Cricket League’s (MCL) record for making three consecutive centuries until 2016.

Roye served as President and Vice-President of Westbury for many years. With his leadership and administration Westbury became a club of recognition that was financially stable, competi- tive and viable. He later transferred his membership to the Villagers Cricket Club in 2010, where he was instrumental in the club winning its first MCL Division I Trophy - 20/20 Championship. In 2011-2015, he was elected President and Captain of the Villagers Cricket Club and led his team to win two champion- ships in 2011, one in 2015 and consecutive triple championships in 2013 & 2014.

Roye is currently into his fourth year as the President of the MCL. The administration has seen a lot of improvements. With his leadership and collaborative efforts with the clubs, political officials, local businesses and cricket stake- holders, he has implemented new ideas, sought out potential investors and had various net- working meetings to aid with the development of cricket and its infrastructure in New York City.

Prior to becoming the president, Roye has held various executive positions in the MCL. He was formerly vice-president for one year and the marketing officer for six years. Roye donates his office space to the league and clubs where meetings are held frequently.

In 2011, he was the founder and captain of the Cool Tech Cricket Team that participated in the US Cricket Open in Fort Lauderdale, Florida. The team finished in the top eight out of 32 teams, and also has been the only team to earn the maximum bonus points in that competition.

He turned his concentration to participating in the Michael Holding Masters Competition which is held annually in Jamaica. He formed the Long Island Masters Team in 2012, a team that immediately won consecutive champion- ships in 2012 and 2013. Roye and his team continue to assist with the sponsorship and development of cricket for the youths in

Jamaica. Roye has also been involved with women’s cricket in New York from 2007.

He played an integral part in the development and promotion of Women’s Cricket in its initial stage. He assisted the New York Region with the recruiting, training, sponsorship and develop- ment of women’s cricket. In 2009 he was appointed Coach for the NYCR Women’s Team that participated in the USACA National Tournament that was held in Cupertino, CA.

Roye is an active member of the New York Cricket Region Board, where he has served in many different capacities including a selector, coach for the senior men’s teams and operation’s officer. During his tenure as President of MCL, he has organized and implemented the Opening Ceremony along with a Six-a-Side Competition for the league; building camaraderie and lifetime friendship among the clubs. This annual tournament is attended by the Brooklyn Borough President, other public officials and the media -- News 12 (aired on national television). The positive interest of the development of cricket by Brooklyn Borough President Eric Adams, has led Roye and his Executives to name the tournament the “Borough President Eric L. Adams Trophy”.

During memorial weekend 2016, Roye was instrumental in bringing a team from Jamaica and Boston to play alongside with New York Masters and MCL Youth team in the MCL Invitational T20 Tournament. The tour was a problem for the Jamaica Team coming to the USA as most of the players did not have their visas. Along with Congressman Hakeem Jeffries Roye sent letters on behalf of 11 players to the American Embassy in Jamaica. All received a 10-year visa.

On January 11, 2017, Roye along with the MCL hosted the President of the West Indies Cricket Board, Dave Cameron in Brooklyn, New York. It was a hectic schedule planned for three days involving the development of cricket and the building of a new stadium in New York. It included discussions, networking session, touring of various cricket fields/sites with New York Parks Department and officials, press receptions held at City Hall and at the Brooklyn Borough Hall attended by Councilman Alan Maisel and the Brooklyn Borough President Eric L. Adams. Cameron was presented with Citations for his outstanding contribution to cricket by the Brooklyn Borough Hall President and the Councilman.

Roye received his Associate Degree AOS from TCI. He has his Operators License. He is the owner and president of Cool Tech AC & Refrigeration (HVAC) for 15 years. He has supported the development and promotion of the game of cricket both financially and physically for many years. Roye has also been an ardent supporter of the Cricket Hall of Fame for 10 consecutive years.

Roye is also involved with voluntary work within the community and is a member of various organizations. He has been an active member of the Caribbean American Chamber of Commerce (CACC) for the past nine years. He was honored in 2009 as Entrepreneur of the Year by CACC. Roye shared the platform with distinguished business and community leaders from a variety of backgrounds and professionals. Roye continues to strive for excellence and achievement in his business and charitable work. He is a recipient of many awards and citations from organizations and public officials