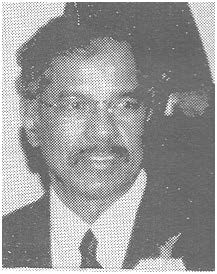 If you were to open a discussion with anyone who is familiar with the s port of cricket in New York and Connecticut, you will find that it will not take long before the name of Shadi Khan is mentioned. Basir Shadi Khan, who has made a name for himself in the sport in this region, was born in St. Helena Village, Trinidad to the late Noorad and Amina Khan. Known to all as Shadi, he played most of his cricket for St. Helena Youth Team in the first division in Trinidad before migrating to New York.
Shadi’s passion for the sport, which led him to take an active part at all levels of the game, developed at an early age in St. Helena, where he and his friends would engage in a ritual during school vacation that began with the catching of fish early in the morning, playing cricket, swimming in the canal to wash away some of the heat, then ending with another game of cricket.
With a strong desire for excellence, Shadi worked his way to become a very successful businessman in New York City, but never lost sight of his culture. There was no excitement greater than the summer weekends, then and now, which he spent playing cricket from Van Courland Park to Marine Park to Staten Island. He said, “It was the best way to stay in touch with a rich tradition, meet old friends and make new ones building a cricket community in the process.”

Shadi, who is an excellent left-arm orthodox spinner with a deceptive arm ball, which has earned him many wickets, gets the greatest pleasure from the game while fielding. He was a peerless fieldsman. The many tumbling saves on the field to this day is a brief glimpse into a storied past of his abilities even though much of his youthful days are behind him.

For the past 31 years, Shadi has been a vibrant and diligent worker in administering cricket both at the club and league levels. Among his many contributions to the sport is his sponsor-ship for more than 21 years of the Lowell Sutherland trophy in honor of his late father-in-law. Sutherland had dedicated his life to the promotion and development of cricket in the area and in the process helped establish the West Indian Social Club. The club has since become a landmark, where cricketers and friends both domestic and foreign can be hosted and feel at home away from home. The competition is held between New York and Hartford cricketers. Mr. Sutherland was an executive member of the club and much of his work is still manifested there years after his passing.
Shadi has been the main artery for SIMS Cricket Club of New York. His kind and spirited personality as a manager and part-time player, has earned his club five championships in the premier Metropolitan Cricket League and four in the Brooklyn Cricket League. Though he is now satisfied to watch the youngsters play, he is still very active in organizing cricket tours as a player on the team. He is an inspiration and an excellent source of camaraderie with other clubs, especially on the many t ours, where his wealth of experience as a cricketer and a gentleman adds a new dimension to the cohesiveness of the club. His stewardship will always be at the helm of the club.
In September 1975, Shadi Khan met his wife Sylmerris while playing against Hartford West Indian Cricket Club. The couple was married a year later. They reside on Long Island, New York, and have three children, a daughter Chantie, 22, who is a fifth year student in the Master’s Program at George Mason University, and two sons, Basir Jr., 20, a junior at Penn State University and Noorad, 18, a freshman at Mercy College. It is with tremendous admiration that the Cricket Hall of Fame honors Basir Shadi Khan as one of the new inductees into its prestigious halls.