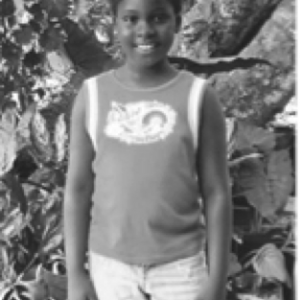 A visit to a primary school in Jamaica by Cricket Hall of Fame’s Program Coordinator, Dr. Dolton James, sometime last year, resulted in the adoption of one of its students, little Annlee James. The little girl who was showing good promise in school was reportedly living in conditions not suitable for a growing child.

After learning of her situation members of The Sportmen’s Athletic Club and the Cricket Hall of Fame responded to a call for help from one of her teachers by pledging to assist her throughout her years in primary school.

The plight of the little girl was brought to James by a teacher while he was at the school making a presentation on behalf of the Hall of Fame towards the school’s rebuilding fund. The school located at Savanna-la-Mar, Westmoreland, Jamaica, had suffered extensive damage from hurricane Ivan which had paid the island a visit. The donation was in response to an appeal made by one of the teachers to the Hall of Fame to help get the school reopened as early as possi- ble.

Annlee, then six years old, was living in cramped conditions sharing a four-room house with her extended family, which included her unemployed mother, another sibling, grandparents, uncles, aunts, cousins and a great-grandfather. Her family is extremely poor and the house which also suffered severe damage from the hurricane is located in an environment that makes it difficult for her to get a good night’s sleep.

Despite her special situation, the sprightly Annlee, who is only able to attend school four days a week, manages somehow to do well in school. She regrets that her family cannot afford to get her the books that she needs, but the teachers were very hopeful that if given some help, Annlee should turn out to be a very good student.

Based on reports from her teachers recently received by the Hall of Fame, there is every indication that the intervention by the Hartford-based groups is paying off. Little Anlee, the report said, did extremely well during the last school term and is ready to more on to the next grade. Members of Sportmen’s and Hall of Fame are very pleased that their efforts are making a difference in the life of at least one child in the school and the community, which is where it all starts. Hopefully she may one day realize her dream of becoming a doctor.