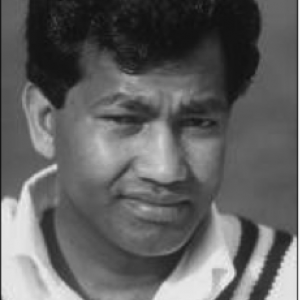 as a Guyanese and West Indian representative is well documented. Born March 21, 1949 in Berbice, Guyana, the left-handed stroke player will be remembered and admired by many for hooking the Australian duo of Lillee and Thompson during the 1975 version of the Cricket World Cup.

Known at the time of his debut as the next Rohan Kanhai, Kallicharran quickly carved a name for himself with his stylish stroke play, recording an unbeaten century in his first Test at Georgetown, Guyana, against New Zealand in the 1971-72 fourth Test. An easy- going individual, he represented the West Indies when winning was an expected norm. His Last Test, also a Fourth Test, was against Pakistan in the 1980-81 series.

Named Wisden’s Cricketer of the

ries and 21 fifties in 66 Test runs with his highest score being 78.

Along with the West Indies and Guyana, Kallicharran, who bowls right-arm off breaks, also played in England and Australia for Warwickshire, Transvall, Queensland and Orange Free state teams.

A highlight of his career is that he was instrumental in preparing the Kenyan national team for the World Cup debut in 1999. Appointed coach of the national team by the Kenyan Cricket Association, he had an opportunity t o share his knowledge of the game to the Kenyans. Because of the success that he achieved in his initial coaching stint with the Kenyans, he was rewarded with a one-year contract extension. He was very impressed with the natural talent that he unearthed in Kenya. The performance of the Kenyan players in their World Cup debut is indicative of Kallicharran’s continuing contribution to world cricket. Kallicharran at present also heads up the Alvin Kallicharran Sports Foundation to help young cricketers in his homeland. The Foundation operated out of England, where he presently resides.

The Cricket Hall of Fame is honored to have Alvin Isaac Kallicharran join the ranks of all the other cricket stars that have been inducted into the institution.