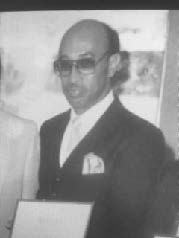 Alfred Louis Valentine was born in Kingston, Jamaica on April 28th 1930. He represented
Jamaica and toured England under the Captaincy of John Goddard in 1950. He had a remarkable series. In his first Test match he captured the first 8 wickets for 104 runs at Old Trafford against England, this is still a world record. He finished the tour with 33 test wickets in a 4 match series, another world record. His over 100 wickets on the tour in first class matches made him the first West Indian bowler to do so. In 1954 at Georgetown, Guyana when he took the wicket of Jim Laker it was his 100th Test victim, enabling him to become the youngest and fastest, beating a record held by Bill O’Reilly. During the West Indies 1960-61 tour to Australia he captured 24 Test wickets in that series, another first for a West Indian bowler. In the third Test at Melbourne he realized a total of 50 Test wickets in 7 Test matches, making that accomplishment the fastest ever in Test Cricket. Alfred Louis Valentine played in 36 Test Matches and captured 139 Test wickets. He toured England three times, New Zealand twice and Australia twice. He was named to the best West Indian team of all time. For two years he captained his national team, Jamaica.
He retired from first class Cricket at the age of 35 and was made a life member of the M.C.C. and awarded the Order of Distinction. A public holiday was proclaimed in his honor in Jamaica in 1950 the year in which he was named as one of the five best cricketers of the year. Val now resides with his wife Jackie in Florida. She is a nurse and he is employed by the State of Florida at Sunland Center.