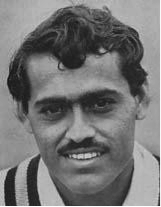 An attack of polio in childhood left Bhagwat Chandrasekhar’s right arm withered but Chandra turned his handicap into an advantage. After a long bouncing run-up, he delivered sharp googlies, spiteful top-spinners and leg-breaks at near medium-pace from the back of his hand with a whipping action.

He could often be erratic, but no one among India’s famous spin quartet was more likely to deliver an unplayable ball than Chandra. His 6 for 38 at The Oval in 1971 gave India their first series victory in England and he was instrumental in India’s first win in Australia in 1978, taking 12 for 104 at Melbourne.

Chandra made his debut in 1963-64 against the visiting Englishmen led by Mike Smith. As a premonition of things to follow, he was dismissed for a duck. However, he snared 4 wickets in the first innings and one in the second to finish with 5 wickets for the game. In the 1974-75 series against the visiting West Indians he gave Vivian Richards a torrid time, snaring him twice on debut for 4 and 3. Coincidentally, Richards made 192 in the next match, but Chandra was dropped for that test.

In 1979 when India toured England, Chandra had his man again. This time it was in a tour game against Somerset. Richards allegedly told wicket-keeper Surinder Khanna “What has he been brought on for?” when the acting captain Viswanath introduced Chandra into the attack. Predictably Richards perished to Chandra’s bowling. In fact, legend has it that when Richards came in to bat, Chandra welcomed him with the words “Here is my bunny.”

Such was Chandra’s hold on Viv. He is probably the only bowler who can claim that honor! The most telling indicator of Chandrasekhar’s contribution to Indian cricket in the 1970’s has been the number of victories he played a major part in. In his 58 tests, he contributed to over 10 Indian victories. When India won at the Oval in 1971, he was the star. When India defeated England at Madras in 1973, Chandra made a vital contribution.