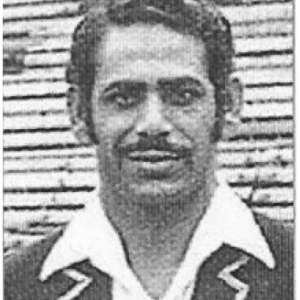 Abid Ali coached the U.S. team which played in the ICC’s 2001 tournament

Former Indian all-rounder Syed Abid Ali, since his departure from the Test arena, has chalked up an extensive career as a coach in his native country, the Arab Emirates and California, U.S.A. He achieved the English Cricket Board coaching certificate for Basics and Advance in 1978. While playing professional for Rawtanstall Cricket Club in India in 1978-79, he was also the coach for the senior and junior teams. During this time, he attended seminars held by toop level coaches in Australia.

Abid Ali, who played in 29 Tests and five One Day Internationals for India, had the feet of a sprinter, the energy of a marathon runner and the will of a decathlete, but his misfortune was that he was born 20 years too early. His game was made or order for one-day cricket. A recognized all-rounder, he bowled brisk medium-pace, fielded outstandingly and was a busy lower-order batsman who ran between the wickets as if on invisible skates.

On his Test debut against Australia at Brisbane in 1967-68, he took a memorable 6 for 55 in the same series, he scored 78 and 81 at Sydney, a performance that earned high praise from Jack Fingleton, the noted Australian cricketer-turned-journalist.

Abid Ali’s career ended abruptly when he was at his peak, after he had top-scored with 70 from No. 7 and taken 2 for 35 against New Zealand in the 1975 World Cup. A bizarre

postscript to this premature curtailment came when he had the dubious pleasure of reading his own obituary after his death was mistakenly announced on the air. After retiring in 1979, Abid Ali migrated to California, U.S.A., and has since coached such clubs as Stanford University Cricket Club, Fresno State University Cricket club and many young, aspiring cricketers. He also coached for the Northern California Cricket Association (NCCA).

In 2001, Abid Ali was the coach for the U.S.A. team in International Cricket Conference’s (ICC) trophy which was played in Canada. The U.S. finished sixth in the tournament. That same year he went to India to coach Andhra Cricket Association, which won the South Zone RANJI championship.

In four years of coaching in UAE, their national team won the ACC trophy twice - 2002 and 2004. They also won the Fast Track three-day first class tournament in the Asian region. Abid Ali also took the UAE national team to the ICC trophy tournament which was held in Ireland in 2005. Abid Ali, who recently completed his coaching assignment with Andhra Cricket Association, is presently the coach for the NCCA in California.