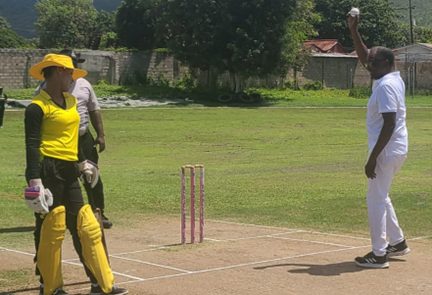 It was a historic day on Saturday, September 2rd, 2022 at the Kensington Sports Club in Kingston, Jamaica. The United States (US) Ambassador, Hall of Famer Nick Perry bowled the first ball of the day in the exhibition Baseball-Cricket match. The inventor of “Baseball-Cricket,” Mahammed Qureshi, CEO of Cricket Council USA sponsored the exhibition game. The opening ceremony of the Dave Cameron Tournament took place at Kensington Cricket Club. An exhibition T10 Women’s “baseball-cricket” game, between Portland Women vs The Rest of Jamaica.
Two other games were played at Kensington on Saturday starting at 12noon. 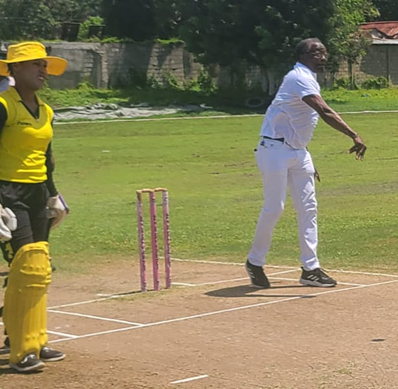 The Ambassador was enjoying his first game in Jamaica. He marked off his run up and approached the wicket as a man on a mission. Remember on Friday, the day before, he was at the Michael Holdings pavilion at Melbourne Cricket Club, where he was inducted into the US Cricket Hall of Fame by the Executive Director, Michael Chambers. Chambers informed the audience that once at a celebrity game in New York the Ambassador bowled him.
Ambassador Perry had a fantastic time by running up to the crease and bowling to Neisha Waisome, one of Jamaica’s female cricketers. This brought back memories of when he last played cricket in the United States and bowled Michael Chambers, Executive Director of Cricket Hall of Fame for a duck. This was shared with the players and brought laughter
to everyone. The Ambassador informed the group that he was enjoying every minute of the day away from his busy schedule. Ambassador Perry had a wonderful time interacting with players and spectators. He then had a relaxing moment watching the tournament. Ambassador Perry and Mrs. Perry enjoyed a healthy serving of Jamaican style brown stew chicken. When the Masters teams took the field to warm up, Ambassador Perry was allowed to bat for a while. The winners of the men’s game were May Pen Masters and Where are they now Masters. The winners were scheduled to playoff on Sunday at the Manley Horne Park, (Ballards Valley), in Saint Elizabeth for the finals. Total prize money was $200,000Ja.
Both teams travelled to Manley Horn Oval in Ballards Valley, St Elizabeth. 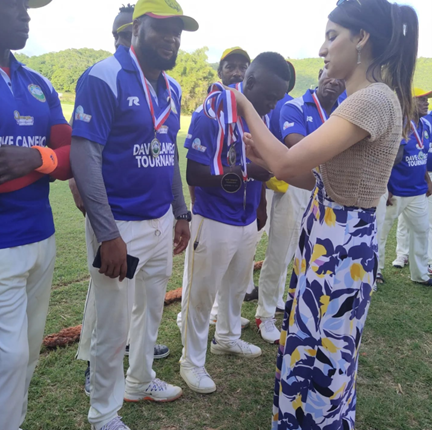