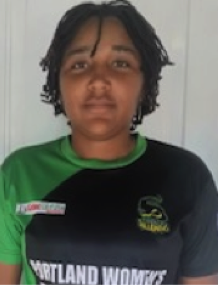 Like Mr. Pink Jody found herself in financial difficulties.  She had to drop out of school for a year. The Hall found out about Ms. Brown’s dilemma and is willing to finance her studies.

My name is Jody-Ann Asanya Brown. I am 28 years old and reside in St. Andrew.I am currently a member of the Portland Women’s Cricket team and made my debut as a member of the Jamaica Women’s Senior team in the recently concluded Regional T20 and 50 overs competition.

I am a left arm spin bowler and a right handed batter.

When I’m not playing cricket I also lend time to my other passions: music and philanthropy. I am the founder of Help Di Yutes Foundation that was started in 2016 and since then we’ve collected and given donations to a total of 11 children’s home.