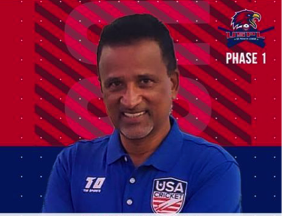 I played Cricket throughout my childhood years at Novar Primary School and for my village at Huntley Cricket Club, Mahaicony, East Coast Demerara, Guyana. I started working at the Guyana Defense Force in 1976 and played a little cricket as well through 1985. I was appointed Manager for the Essequibo U19 Team in 1992. I was appointed Transportation and Customs Personnel for the Guyana Cricket Board in 1994 to 1995. I later migrated to the United States of America in November 1995. I continued as a Cricketer for Everest B Team in Queens New York in 1996. I later played for Hempstead Cricket Club in 1998 to 200 I officially started Umpiring in Queens and Long Island in 1998. I moved to Florida and Umpired full time in 2002. I started to work with the USA Cricket Board Transportation and ground liaison officer.

In 2011 to 2013, I was elected PRO for the United States Cricket Umpire Association.

In 2013 to 2016, I was elected Vice President for the United States Cricket Umpire Association.

In 2017 to Present, I was elected President for the United States Cricket Umpire Association.

previous article
Veronica Campbell Brown, CD and Donald Quarrie, CD to be honored in NYC May 28, 2022
next article
Shafiq Jadavji, Class of 2022, President of JCCricket