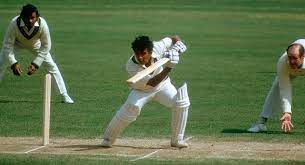 Former India captain Sunil Gavaskar (first Indian Player Inducted in Cricket Hall of Fame), the recipient of the Padma Bhushan Award, who made his Test debut five decades ago (against West Indies at Port of Spain on March 6, 1971) will be felicitated in the United States of America (USA), it is learnt.

This was confirmed by P.K. Guha (Cricket Hall of Famer), an ardent follower and promoter of cricket in the USA.

Speaking exclusively over the telephone on Wednesday, he said, “Yes, we are going ahead with our plan to host Sunil’s 50th anniversary of Test Cricket debut celebration”.

Incidentally, the celebration was scheduled to be held last year in 2021 but had to be postponed because of Covid restrictions.

“The event is scheduled for July 30 (Saturday) in Farmington Hills, a Detroit suburb here”.

“Kapil Dev, Gundappa Vishwanath, Clive Llyod and Farokh Engineer are scheduled to join the event, other than Sunil himself”, Guha further added.

Vishy and Sunil are brothers-in-law. Viswanath is married to Gavaskar’s sister Kavita.

In 2015, Guha had organized the biggest cricket event in Michigan by hosting cricket legends such as Gavaskar, Vengsarkar, Wadekar, B.S. Chandrasekhar,  Engineer, Chetan Chauhan, Karsan Ghavri and Padmakar Shivalkar. Guha had a special bond with the late Chetan Chauhan.

Cricket fans in the metro Detroit area enjoyed interacting with the cricket stars at a sold-out show in Troy, Michigan

It was the 2nd Test of 22 years old Sunil Gavaskar’s career & it was also his debut series which was played at West Indies. During his debut Test he managed to score 65 & 67* & it was 3rd Test of the series which was played at Guyana, Sunil  Gavaskar managed to score his maiden Test ton (3rd Inning of his career with 116 runs in the 1st innings. He followed it up with an unbeaten 64 in the second innings.

During the next game he managed to score another century & during the 5th & last Test he finished up with twin tons in same test ( one of them was a double century )completing the series with staggering run tally of 774 at an average of 154.80. That’s still the record for the most no of runs in a debut Test series.

Here is how he managed to perform during that tour.

previous article
Rohan B. Kanhai : A Great Batsman
next article
USA Qualifies for the ICC Men’s T20 WC 2024 as a host with the West Indies