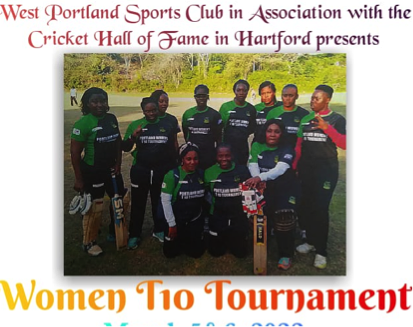 In a rear interview with the Hall of Fame Gazett, Executive Director Mike Chambers explained that the Portland Women’s Tournament is a going to happen. When, I don’t know but it is going to happen. Chambers explained that 15 women from Portland in 2019 tried to visit the USA to play in the Georgia Women’s Tournament. All 15 women were denied visas.

In a conversation with Naomi Hall, the leader of the Portland group, Chambers promised the women their own tournament in Portland. He promised it would be an annual event and it would grow into the talk of the Island. With the blessings of JCA the first tournament took place in 2020.

Four female teams will take part in the competition. I am excited that some of Jamaica’s talented women will be included. Portland Titans, CCBlazers, Shrewbury Giants, Eastern Strikes.

The men were jealous and so four men’s teams will be participating in the tournament. Ultimate Masters, Portland Masters, St. Mary Masters and Domtar Masters.  We at the Cricket Hall of Fame are always working to make women’s cricket the success it should be. We will always support the Portland Women’s T10 Tournament

IT IS NOT TOO LATE TO SUPPORT A GOOD CAUSE. CLICK ON THE DONATE BUTTON ON THE WEBSITE