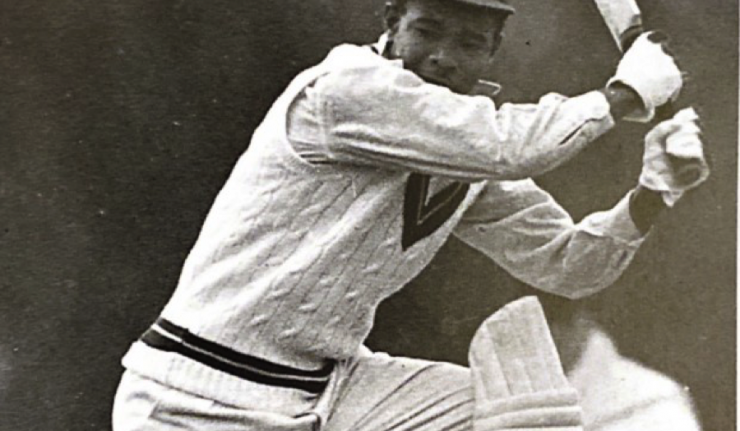 Everton attended St. Leonard’s Boys’ School from 1930 to 1939 and it was during his time there that he developed an unbridled love for the game of cricket.

Sadly, cricket in Barbados was governed by class, race and educational background. Therefore, because of his humble beginnings and lack of a secondary education, Everton was not accepted to play for any of the established clubs in the Barbados Cricket League (BCL) or the Barbados Cricket Association (BCA)

Despite this disappointment, Everton at the tender age of thirteen, was selected to represent Westshire club in the BCL. Because of his success at Westshire, he was also selected to play for Garrison Sports Club (GSC) in the BCA First Division.

Everton Weekes played with distinction for both clubs and in 1945 he made his debut for Barbados against Trinidad. He quickly established himself as one of the premier batsmen in the region by scoring heavily and attractively for Barbados.

When England visited the West Indies in 1947-48, their first territorial match was against Barbados. Everton Weekes took advantage of the opportunity by scoring a brilliant unbeaten 118 runs against the tourists. This inning secured Sir Everton’s place in the West Indies Test team to play against England.

West Indies won the series 2-0 and Everton Weekes scored 293 runs to finish second in the West Indies’ series aggregate to Frank Worrell’s 294 runs. Everton also scored his maiden Test century during the Fourth and final Test which was played at Sabina Park.

The legend of Everton Weekes was born during this five-match series which the West Indies won 1-0. He scored 779 runs (average 111.29) including scoring four centuries in consecutive innings.

He became a cricket “immortal” when he scored a century in each inning (162 and 101) during the third Test at Kolkata.

The 779 runs still stand as the record for runs scored in any series played in India.

This tour saw Everton develop into an elite Test batsman who consistently delighted the spectators with a full range of attacking strokes.

The West Indies then toured England in 1950 for a visit which saw them achieve their first ever series win (3-1) in England.

Sir Everton helped the cause by scoring 338 runs with one century to finish behind Frank Worrell’s 539 and Allan Rae’s 377 runs. He also took 11 catches in the 4 Test series.

Sir Everton suffered a loss of form when the West Indies went on a tour to Australia (five Tests) and New Zealand (two Tests) during the 1951-52 season. He scored 245 runs against the Australians who won the series 4-1 and then scored a paltry 60 runs in the 1-0 series win against New Zealand.

The four match Test series against the English tourists was drawn 2-2. Sir Everton’s rich vein of form continued as he finished 2nd in the batting aggregate to Clyde Walcott (698) by scoring 487 runs with one century.

The powerful Australians toured the Caribbean in 1954-55 and easily defeated the West Indies 3-0 despite Walcott’s record setting 827 runs and Weekes’ well composed 469 runs with one century.

The West Indies won the series against New Zealand 3-1 with Weekes leading the way with 418 runs scored at an average of 83.60 with three centuries.

England easily defeated the West Indies 3-0 as Everton, suffering from a chronic sinus problem, could only produce 195 runs to finish sixth in the batting.

The Pakistan team visited the Caribbean during the 1957-58 season for the first time in their history. The West Indies won the series 3-1.

This was Everton’s final series and he signed off on his Test career at just 33 years old. He reminded everyone of his class and stature in the cricketing world by scoring 455 runs with one century to finish behind Garry Sobers’ 824 runs and Conrad Hunte’s 622.

The statistics reveal that Sir Everton was one of the most consistent and prolific batsmen in the history of cricket.

His batting average of 58.61 is seventh on the all-time list of batsmen who have scored at least 2,000 runs in their career. Among West Indian players only the most excellent George Headley who is third on the list, is ranked above him with an average of 60.83

When Sir Everton Weekes retired at the end of March 1958, his 4,455 runs placed him seventh on the all-time list and his 15 centuries also earned him seventh place all time (tied with Clyde Walcott)

Sir Everton is generally regarded as one of the greatest batsmen in the history of the game. He was blessed with a keen eye, exceptional balance, sharp reflexes, nimble footwork and powerful wrists.

Sir Everton used all these attributes fearlessly as he became a dominating force against all bowlers. He scored his runs quickly without taking unnecessary risks and prominent features of his batting were his exceptional hooking, pulling or cutting off the back foot as was his driving off the front foot on either side of the wicket.

Although he was considered to be ultra-aggressive, Sir Everton rarely deliberately hit the ball in the air. He is credited with hitting just 1 six during his Test career although some sources insist that he actually hit two sixes.

Sir Everton Weekes is immortalized as one of the members of the legendary “Three Ws” batting triumvirate. The others being Sir Frank Worrell and Sir Clyde Walcott.

previous article
Can SAFEZONE WATCHES Help to Detect COVID-19 at Home?
next article
Is the Caribbean Region the next investment nirvana”?